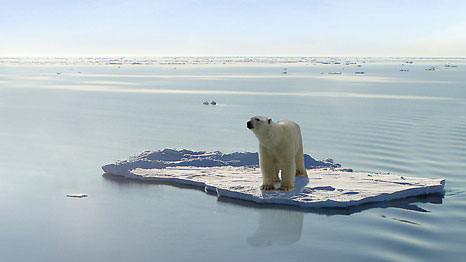 Greenland’s polar bears have a thyroid problem. Their endocrine systems, too, are being disrupted.

In both cases the culprit agency is environmental pollution by a range of long-lived industrial chemicals and pesticides.

Kristin Møller Gabrielsen of the Norwegian University of Science and Technology in Trondheim and colleagues report in the journal Environmental Research that they examined the liver, muscle and kidney tissues taken from seven polar bears killed by Inuit hunters in East Greenland in 2011.

They also analysed the effect of more than 50 contaminants in plasma samples from Ursus maritimus, to see what effect organohalogen compounds could have on the bears’ thyroid systems.

All mammals have thyroid systems, and these are physiologically essential for growth, development, reproduction, stress response, tissue repair, metabolism and thermoregulation (an animal’s ability to keep its body temperature within limits): disruption at any stage of life can be damaging, but thyroid regulation is vital in the earlier stages of life.

The researchers found high concentrations of plastic pollution and pesticide contamination in the creatures’ tissues, many of which could affect the hormonal systems.

Polar bears face an uncertain future: the Arctic’s most iconic predator depends on sea ice for access to the most nourishing prey – seals.

But thanks to global warming driven by greenhouse gases discharged by humankind since the start of the Industrial Revolution, the ice is in retreat.

The bears can and do forage on land for small prey, eggs, berries and so on, but new researchsuggests that this is unlikely to help them much.

“The health of the Arctic polar bear is being attacked from all fronts, but among many other factors is the exposure to environmental contaminants,” said Maria Jesus Obregon, of the Biomedical Research Institute in Madrid, one of the authors.

The biggest problem that confronts Ursus maritimus is still climate change, loss of habitat and a more precarious food supply.

But as a marine mammal, the bear is exposed to a huge range of pollutants delivered by modern industry, transport and commerce.

Researchers in February calculated that in 2010, around eight million tons of plastic waste
ended up in the world’s oceans.

A second team of researchers has framed guidelines for the conservation of the polar bear, and proposed 15 measures that could determine the factors important in saving the creature from ultimate extinction.

They report in the journal Science of the Total Environment that they questioned 13 specialists from four nations to propose ways of measuring polar bear health.

Not surprisingly, climate change topped the list of threats, but the list also included nutritional stress, chronic physiological stress, diseases and parasites, and increasing exposure to competitors. Exposure to contaminants was the third largest threat.

“We still don’t know to what extent environmental changes will affect polar bear health and therefore its conservation,” say the authors.