Presidential bid could be first in US history to make global warming key election issue, highlighting differences with Republicans 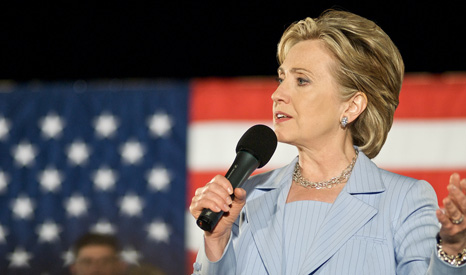 Tacking climate change and investing in clean energy would be a priority for a Hillary Clinton presidency, according to the man running her bid to become the next US president.

John Podesta, who recently quit his job as advisor to President Barack Obama, tweeted this would be “top of the agenda” for Clinton as she prepares her run for the White House.

A Washington veteran who was also advisor to Bill Clinton, Podesta is widely credited as the brains behind Obama’s climate change plan, published in 2013.

In a speech last December Hillary Clinton said Obama’s carbon cutting policies “must be protected at all costs”, labelling them “unprecedented” and calling for politicians to “act decisively… to head off catastrophic consequences.”

According to local media, a focus on climate change would make this the first presidential campaign ever to touch on the issue, which has split lawmakers on Capitol Hill.

The two Republicans to have announced plans to run, Rand Paul and Ted Cruz, are both firmly in the climate sceptic camp and have said they believe the links between greenhouse gas emissions and global warming are unclear.

In her book ‘Hard Choices’, published last year, Clinton argued that promoting economic growth over the environment was a “false choice.”

She became aware of the impacts of rising temperatures on US ecosystems after a visit to Alaska in 2005 she said, where she saw dying trees and forest fires.

“Virtually everyone I spoke to on that trip had a personal wake-up call about what was happening,” she wrote.

“A tribal elder recounted how he had returned to a lake where he had fished as a boy only to find it dried up. I met lifelong participants in dogsled races who told me they no longer even needed to wear gloves.”

As US secretary of state from 2009 to 2013, Clinton also oversaw Washington’s strategy at UN climate talks, and experienced at first hand the tortured nature of international emissions negotiations.

In a detailed account of the closing hours of the ill-fated Copenhagen UN climate summit in 2009, Clinton’s book chronicled how she and the president stalked the corridors of the conference centre hunting down the Chinese leader, who they suspected of organising a secret meeting.

“Off we went, charging up a flight of stairs and encountering surprised Chinese officials, who tried to divert us by sending us in the opposite direction. We were undeterred,” she wrote.

“The Chinese guards put their arms up against the door again, but I ducked under and made it through.

“Jaws dropped when they saw us. ‘Are you ready?’ said President Obama, flashing a big grin. Now the real negotiations could begin. It was a moment that was at least a year in the making.”