India turns back clock to save water, as climate concerns mount

Rainwater harvesting has transformed Rajasthan, and could be used to combat the effects of climate change 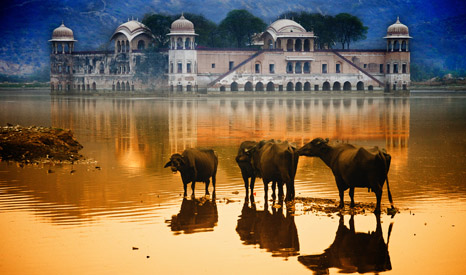 School textbooks in India have been telling children for generations that Rajasthan is an inhospitable state in the northwest of the country, constrained by the hot, hostile sands of the Thar Desert.

But the driest state in India has a softer, humane face as well – that of Rajendra Singh, known as the “Water Man of India”, whose untiring efforts in water conservation in arid Rajasthan have led to him being awarded the Stockholm Water Prize, commonly referred to as the Nobel Prize for Water.

Singh did not attempt to design a new technology to address Rajasthan’s water problems.

He began simply by de-silting several traditional surface level rainwater storage facilities – called “johads” in the local Hindi language − that fell out of use during British colonial rule. And, in doing so, he has quenched the thirst of villages that were dying.

Thousands of villages followed his example, and so much water was captured and soaked into aquifers that dry rivers have begun to flow again.

Singh believes that water conservation is vital to combat the effects of climate change and to avoid “water wars” in the future.

And such is his reputation on water issues that he received a call from Prince Charles, heir to the UK throne, seeking advice on how to handle the devastating summer floods in England in 2007.

In an interview with Climate News Network, Singh recalled how he began making water flow again in perennially dry Rajasthan by inculcating do-it-yourself initiatives in the villagers.

He explained: “I imbibed Gandhian ideals during my school days that emphasised working for empowerment of villages.

“As an Ayurvedic (traditional medicine system in India) doctor, I went to the Alwar district of Rajasthan early in 1982 to start a clinic and spread awareness among youth about health and hygiene.

“I was perturbed because the majority of young men had already left the village, and the rest were about to leave for green pastures in the cities as they were unable to battle the water scarcity. Besides, they also wanted to earn good money.

“Women, old people and children were left behind in the village. I reworked my doctor plans to address the water scarcity, as that would actually save people from several diseases.

“Along with the support of the villagers, I de-silted a couple of johads in Alwar. When rains filled them, people in neighbouring villages trusted my initiative and over 8,000 johads are renovated now.

“Hordes of youth have returned to their villages as water filled tanks and the standard of living in hamlets rose in a big way.”

He said that five rivers in this region had revived and started to flow again.

Johads are simple tanks built across a slope, with a high embankment on three sides and the fourth side left open for rainwater to enter. They hold water during rains and recharge the aquifer below to ensure continuous water supply to the neighbourhood in the dry season.

But Singh explained: “After the advent of bore wells and pipelines connecting every hamlet in India, we forgot the traditional water conservation facility used by our ancestors.”

Having won the Stockholm prize, what does the future hold for the Water Man?

“My immediate plans are to take up a global-level campaign on water conservation and peace,” he said. “As predicted by several experts, the next world war will be for water. Unless every one of us starts at least now to save water and protect the water bodies, we face severe conflicts − apart from suffering climate change impacts. I will be leading the global water walk in the UK in August 2015.

“During his two visits (2004 and 2006), Prince Charles told me that he was impressed by the johad model of conservation. He then called me in 2007 to be part of his team of water engineers to work out all possibilities to address the crisis during the floods in England. They listened to my suggestions on creating the johad model on hilltops and downhill to arrest water in the hills and prevent floods in the future.”

In India, however, he is not confident that the government has the right ideas. “Our government is pushing a different idea of inter-linking of rivers, which will only politicise the water crisis. I was part of the national-level body to clean up the holy Ganga River from 2010 to 2012, but I quit as there was lack of accountability and it ended up as a toothless organisation.

“Inter-linking of rivers is not a solution for flood and drought. As far as India is concerned, it will result only in inter-linking of corruption and politics.

“What we need is inter-linking of the hearts and brains of people to take up water conservation in their homes and community. If exploitation of river water and polluting the river are stopped, every river will flow. Water engineering should be focused on conservation of each drop, and not on changing the course of rivers, which are designed by Mother Nature.”

Singh is also against the idea of privatising water supplies, and does not believe it would result in people using water more judiciously.

“Water is not a commodity,” he said. “In my own example, johads are de-silted by the people and used by people. Community-based water management yields long-lasting results and is the only solution for water shortages.

“When people realise their need and de-silt lakes and ponds as a group, they can use the water without having to pay for it. Right to water is every man’s right, and monetising water will increase conflicts in the society.