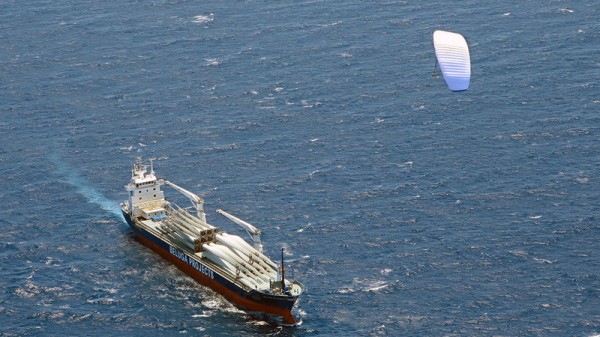 Using a “skysail” can cut fuel consumption by up to 35% (Pic: Flickr/PressReleaseFinder)

There is a “significant risk” shipping emissions will rise as the economy picks up, scientists have warned.

There is “no evidence to suggest that such reductions will be maintained,” with emissions forecast to grow 50-250% by 2050 under business as usual.

The sector must “urgently” find ways to cut emissions if it is to make a “reasonable contribution” to global efforts to combat climate change. “The sector cannot afford any complacency.”

Governments agreed in 2009 to limit global warming to 2C above pre-industrial levels.

The International Maritime Organization has said shipping will make a “fair and proportionate” contribution to this goal.

Shipping lines should run their vessels at slower speeds, improve efficiency and embrace innovation to scale up to the challenge, they recommend.

Emissions fell between 2007 and 2012 largely as a result of “slow steaming” – travelling at less than top speed to save fuel costs.

Falling oil prices and an economic upturn are set to reverse that trend. But adapting ships to routinely run on lower speeds could deliver “significant savings”.

Technology like Flettner rotors, biofuels and even sails could also slash fuel use, the researchers found, given the right incentives.