Renewable source could supply 10% of electricity by 2020 and 20% by 2030 with policy stability, says energy department 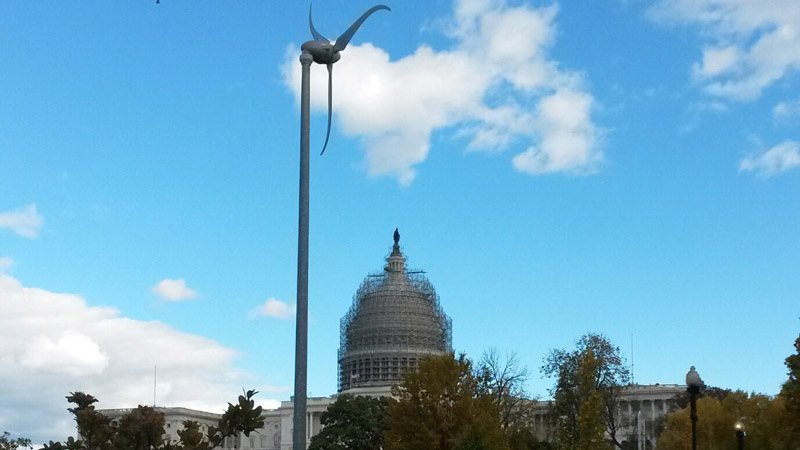 It predicted wind energy will be “directly competitive” with fossil fuels by 2025, and could support more than 600,000 jobs across the country’s 50 states.

A widespread switch to electricity from wind from coal, oil and gas would help avoid 12.3 gigatonnes of emissions and US$400 billion in global damage from climate change by 2050, it said.

Investment in wind would also see a 23% reduction in water consumed by the electricity sector by 2050, a massive benefit for states like California which have crippling water shortages.

But while the deployment of wind energy has grown faster than any other renewable technology in the US, the industry is now at a “crossroads” said the DoE report, based on two years of research and with input from 100 companies.

“Wind’s growth over the decade leading to 2014 has been driven largely by wind technology cost reductions and federal and state policy support,” it warned.

“Without actions to support wind’s competitive position in the market going forward, the nation risks losing its existing wind manufacturing infrastructure and much of the public benefit” 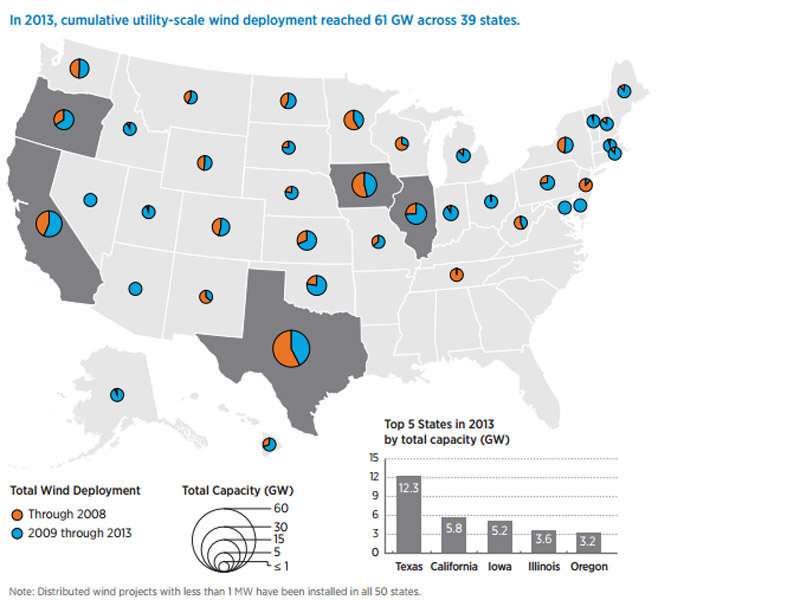 Plans to ramp up US clean energy deployment are expected to be at the centre of Washington’s contribution to a forthcoming UN climate accord, set to be signed off in Paris later this year.

But president Barack Obama’s attempts to use federal funds are likely to be frustrated by his Republican opponents in Congress, who oppose handouts to what they argue is now a well-established sector.

Investments in wind farms averaged $13 billion a year from 2008-2013, and by 2016 wind generation is projected to supply 7% of total electricity demand after projects currently under construction are completed.

But the report’s authors said growth rates could fall unless a new tranche of government support – known as production tax credits or PTCs – are approved.

The credits offered a 2.3-cent per kilowatt-hour (kWh) incentive for the first 10 years of a facility’s operating life, but were withdrawn at the end of 2014.

A bill to extend PTCs for five years was defeated in the Senate 51-47 in January, and if they are not re-instated the wind industry’s “robust growth is not projected to continue”, said the report.

Transmission infrastructure would also need huge investment, given the poor state of the US national grid, described last week as a “black hole” by US secretary of state John Kerry.

Given the variable nature of the weather, renewable technologies work better when they have access to a flexible grid that can send and receive power over long distances, which could compensate for low wind or sun levels in certain states.

“Many potential sites with high quality wind energy resources have minimal or no access to electrical transmission facilities. This creates a bottleneck to cost-effective wind deployment,” said the report.

An average of 890 circuit miles a year of new transmission lines would be needed between 2021 and 2030, said the authors.