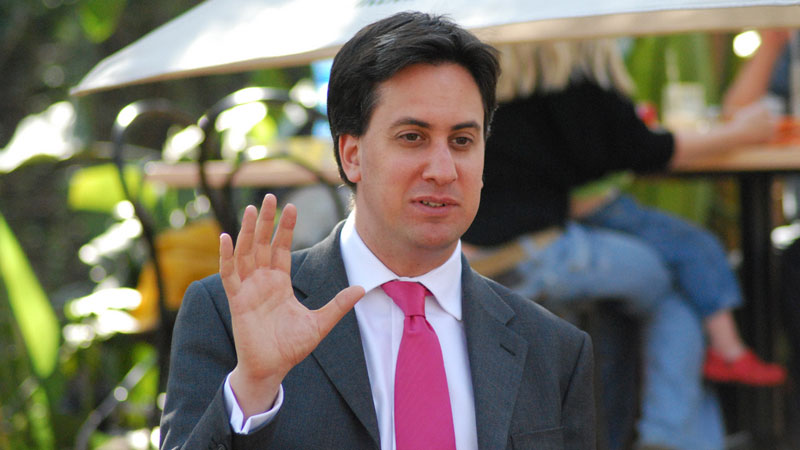 Ed Miliband says tacking climate change will be one of his “highest priorities” if his party wins power at this year’s UK general election.

The Labour leader made the pledge in the Observer newspaper on Sunday, where he also announced he had appointed Lord Prescott as his climate advisor.

“This government, which has long abandoned the pretence of being the “greenest ever”, has cut and delayed investment in green technology,” Miliband wrote.

“While Tory MPs flirt with climate change denial, confused and contradictory signals on energy policy from ministers have caused deep uncertainty for investors.

“If Labour wins in May, we will put that right.”

Bit unfair to say Labour talking about climate change now because of Green surge. May explain timing but Miliband is genuinely, deeply green

Climate change is not “just” an environmental issue, Miliband added, but an “economic necessity” given the potential threat from extreme weather events and the opportunities from green growth.

“There is no trade-off between tackling climate change and building an economy in which working families succeed. Indeed, success on one will help us achieve the other,” he said.

This move is the latest sign that Labour strategists believe climate change could be a vote winner at the election – as well as protecting Labour seats from a sharp rise in support for the Green party.

Polls released on Sunday suggest the Conservatives enjoy 35% public support, with Labour on 33%.

Prescott has long argued to tougher climate policies, having led the EU negotiating team back in 1997 when the Kyoto Protocol to curb greenhouse gas emissions was agreed.

Now a peer sitting in the UK upper chamber, the former deputy prime minister said in his Sunday Mirror column that climate change hung above the world “like the sword of Damocles”.

“My brief is to engage heads of state and governments, to raise their ­ambition. He’s also asked me to ‘bash heads together’. Intellectually, of course!

“But as well as advising Ed I’m also prepared to work with the current UK Government. This should be above politics – we need to work together.

“Every grandparent wants to give their grandkids the world for Christmas. By December 25, I hope to be able to give them a much better one.”