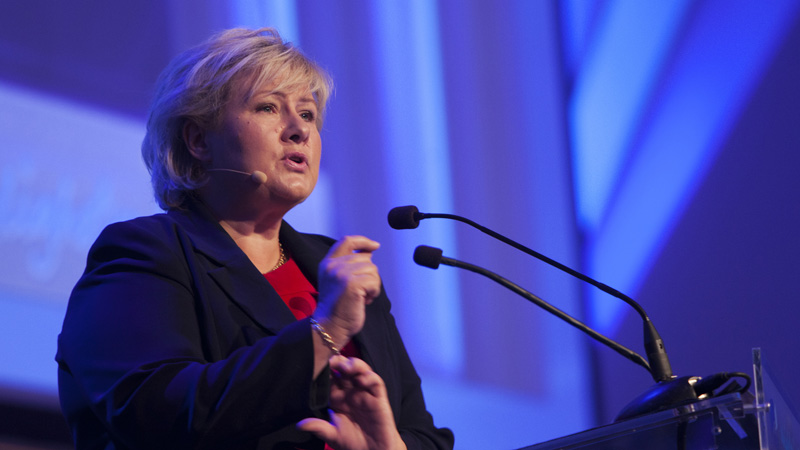 Norway’s government has said it will target 40% greenhouse gas emission cuts on 1990 levels by 2030, matching the EU’s goal.

The announcement comes days before UN envoys meet in Geneva to discuss a global deal to address climate change, which scientists say will increase the risk of extreme weather events.

Prime minister Erna Solberg said the country needed to take “brave new steps” to curb its emissions, which were 3.7% above 1990 levels in 2013, higher than the EU average.

“The Norwegian climate target will be in line with the overall target to avoid an increase in global average temperature of more than two degrees Celsius compared to pre-industrial levels,” she said.

On Wednesday Brussels announced it would officially deliver that pledge to the UN on February 25 as part of its contribution to a proposed 2015 Paris climate deal.

Norway is not a member of the EU, but is part of the bloc’s emissions trading scheme which covers heavy industry and the power sector.

Oslo wants to deepen its integration with the EU’s own 2030 climate framework, enabling it to offset emissions from sectors like agriculture, waste and transport which are not covered by the ETS, but do come under the EU’s 2030 package.

“A joint fulfilment with the EU allows for a more efficient climate policy and will give more predictable conditions for Norwegian businesses,” said Siv Jensen, minister of finance.

Eldar Saetre, chief executive of state-controlled oil major Statoil, told Reuters the target was “amazingly demanding”, but welcomed the move to increase links with the EU.

Bard Lahn, a Norwegian climate consultant, said the government needed to find new ways of offsetting its emissions once the Kyoto Protocol (KP) expires in 2020.

“As long as KP has been around Norway has relied heavily on the clean development mechanism [a UN carbon market] and other flexible mechanisms, but after 2020 who knows what the international system will look like,” Lahn said.

A 40% emission target would be harder to achieve for Norway than other EU states he added, mainly due to the expansion of its fossil fuel sector since 1990.

In 2013 Norway’s government said it expected a “long term rise” in emissions unless new policies are implemented.