Diplomats must complete draft text in Geneva next month, or risk undermining legal basis for a global accord in December 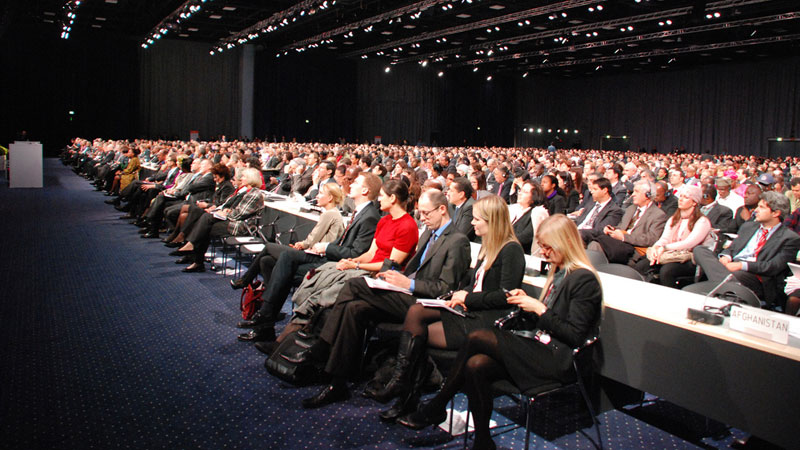 The co-chairs of the UN climate talks have told diplomats that they must finalise the draft version of a 2015 Paris deal this February.

Diplomats from around the world will meet in Geneva 8-13 February for the first time since Lima, where they crafted a sprawling 38-page text laying out the various options for the landmark UN deal.

It is the last time they meet before May, by which time UN rules dictate that the draft version of the negotiating text must be available. This allows time for the text to be translated from English into the five other UN languages before the Paris summit in December.

The newly appointed co-chairs – Ahmed Djoghlaf from Algeria and Dan Reifsnyder from the US – issued a “scenario note”, which lays out instructions to delegates ahead of the talks.

The group responsible for drafting the text will be expected to work until 8pm every day to turn the document into something “streamlined, concise, manageable and negotiable”.

“To this end, the contact group will be tasked to streamline language and eliminate redundancies and duplications, better present alternatives and divergences, and clarify, to the extent possible, proposals and concepts,” said the co-chairs.

They have also asked delegates to identify which elements are crucial to the new agreement, and what could be included separately in the decisions coming out of Paris.

Despite the co-chair’s best intentions, there is still potential for the text to expand before it is whittled down to a manageable size, said Tosi Mpanu Mpanu, lead negotiator for the Democratic Republic of Congo.

“The text as it stands captures most of the views, though the views are quite diverse, but it is in a way a Christmas wish list,” he told RTCC.

“My sense is that parties will try to elaborate on what their view is, and the text may get longer, but the co-chairs will have to capture the gist of parties’ positions, so that when we leave Geneva the text is a little bit shorter.”

Currently, the text encompasses a variety of topics and levels of ambition.

The options which parties choose to keep – and which they choose to delete – will ultimately determine the extent to which a Paris deal can curb global warming.

Among the most ambitious options is a target to commit to net zero emissions by 2050.

Wael Hmaidan, head of Climate Action Network International, said that he expects the spectre of Copenhagen – where parties failed to agree an international treaty – will hang over the week of negotiations.

During those 2009 talks, a negotiating text of around 200 pages stymied progress at the negotiations.

Despite four years of preparation, the timing is tight.

“In just six days, the co-chairs need to provide a draft text that has enough confidence and trust of the different parties across the board to have acceptance to be the basis of the negotiations,” Hmaidan told RTCC.

“They need to keep it at a manageable size, coherent and very concise, as much as possible, at the same time as getting approval for it. It’s a very tough balancing act.”

The session is crucial, he added, because the Paris text will not be legal unless the draft is completed by May.