Glaciers melting as a result of climate change release soot into the seas, scientists find, with unknown impacts on marine life 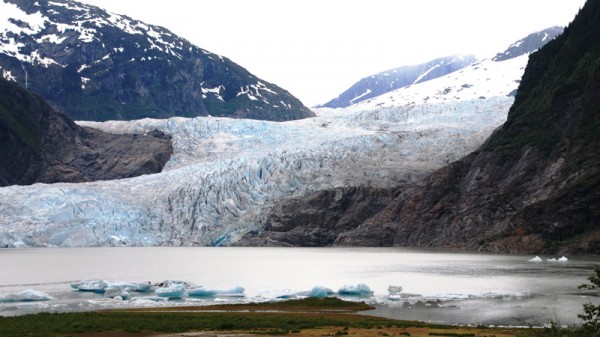 Researchers in the US have calculated that, thanks to climate change, melting glaciers will have spilled an extra 15 million tonnes of organic carbon into the seas by 2050.

The consequences for the ecosystems that depend on glacial meltwater are uncertain, but this burden of biological soot and sediment has implications for the global carbon cycle as well.

The researchers estimate that the dissolved organic carbon released by melting glaciers will be an increase of half as much again on the current flow − the equivalent of about half the annual flow of dissolved carbon down the Amazon River. And their calculations have identified another puzzle for climate scientists trying to understand the carbon cycle.

The planet’s glaciers and ice sheets cover about 11% of the planet’s surface and hold about 70% of the world’s fresh water. Spread thinly through this frozen water is a significant amount of biological carbon, with the Antarctic ice sheet alone hosting 6 billion tonnes of it.

It is safe for the time being, but mountain glaciers almost everywhere in the world are in retreat, and meltwater flow from the glaciers that drain the Greenland icecap is on the increase.

Eran Hood, professor of environmental science at the University of Alaska Southeast in Juneau, and colleagues report in Nature Geoscience that they developed a database of dissolved organic carbon found in 300 samples collected from glaciers on five continents.

Some of it was clearly preserved from living things on the ice itself, some of was scraped up as the glaciers moved over old soils, and some of it was soot from fossil fuel combustion or distant forest fires.

There was a wide spread of carbon concentrations in the samples, but it was enough to estimate a global average.

They also knew that Greenland and Antarctic icebergs delivered 4,250 billion tonnes of water to the oceans each year, and that the run-off from retreating mountain glaciers was somewhere between 369-905 billion tonnes.

So they could begin to make an estimate of the rate at which dissolved organic carbon is re-entering the planetary system, and perhaps augmenting the carbon cycle.

The carbon cycle underwrites all life: plants and microbes withdraw carbon from the atmosphere and some of it gets stored in the soils, preserved as peat, or locked away as rock, or frozen as ice to be returned to the planetary system in all sorts of ways,

Research like this is basic: it adds another detail or two to an understanding of how the planet works. It starts to answer existing questions − but it also raises new ones.

“This research makes it clear that glaciers represent a substantial reservoir of organic carbon,” said Hood. “As a result, the loss of glacier mass worldwide, along with the corresponding release of carbon, will affect high latitude marine ecosystems, particularly those surrounding the major ice sheets that now receive fairly limited land-to-ocean fluxes of carbon.”

His co-author Robert Spencer, assistant professor of oceanography at Florida State University, said: “The thing people have to think about is what this means for the Earth. We know we are losing glaciers, but what does that mean for marine life, fisheries, things downstream that we care about?”