A new tool backed by the UK government allows anyone to test the impact of lifestyle, fuel and land use choices on the climate 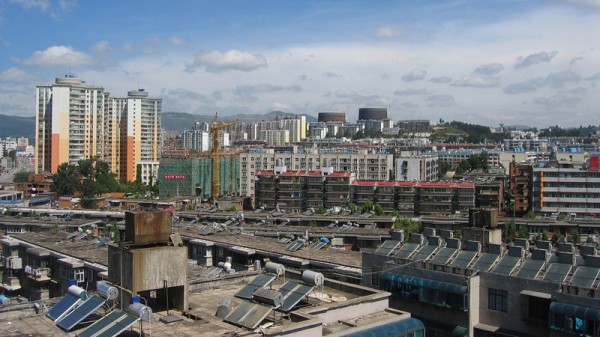 Ahead of a critical round of UN climate talks in Paris this December, countries are preparing their draft national contributions to a global climate deal.

China, India and Colombia are among those drawing on a calculator tool developed by the UK government to test out different policy combinations.

On Wednesday, the Department of Energy and Climate Change (DECC) launched a global version, with the input of more than 150 experts worldwide.

Based on evidence from the latest Intergovernmental Panel on Climate Change report, it shows the likely climate impacts of choices in 14 different policy areas.

It is free for anyone to experiment with assumptions about future lifestyle, fuel and land use and see how they affect the path of global warming.

So what does it tell us about tackling climate change? RTCC looked at some possible scenarios. Try it for yourself and comment below.

The International Energy Agency’s business as usual scenario (IEA 6DS) entails warming of up to 6C above pre-industrial levels by 2100.

It takes the UN central estimate of population growth, to 9.6 billion by 2050 and assumes no extra effort to cut emissions.

The climate section of the calculator is vague on the impacts of this trajectory, reflecting a broad range of possible outcomes.

But this path could lead to 2.2m of sea level rise and a “high” risk of extreme weather events, it says.

DECC suggested four different options that give a 50% chance of limiting temperature rise to 2C above pre-industrial levels. That is the temperature threshold agreed by governments in 2009.

For all but one, in which consumers embrace lifestyle changes, the team kept the assumptions about lifestyle in the IEA 6DS model.

Each option requires “very ambitious” developments in many areas of clean energy and land use – but none of the most extreme choices offered in the model.

Ed Davey, the UK energy and climate change secretary, said these showed “everyone in the world can prosper” while avoiding the most serious impacts of climate change.

What the calculator does not do is tackle the most contentious element of climate action – how efforts are shared between countries and regions.

As the accompanying report makes clear, it could mean inequality has reduced by 2050 or that some countries overeat while others starve. 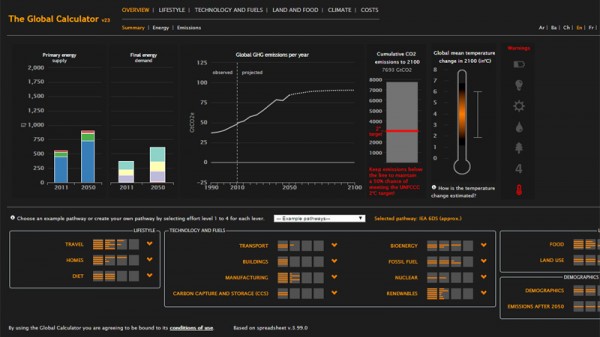 Friends of the Earth built a scenario that offers a 50% chance of limiting temperature rise to 1.5C. That is a threshold advocated by some of the most vulnerable countries to climate change, including African and island states.

The green NGO does this without nuclear power or carbon capture and storage, and minimal use of bioenergy. It does not even go big on wind power, choosing only the second most ambitious of four options.

The trade-offs come in population and lifestyle.

Firstly, it assumes world population growth is limited to 8.3 billion in 2050.

Meat consumption is set at 2011 Indian levels, requiring a drastic reduction for the Western world. Car use is limited to 29% of urban journeys. People have a limited number of home appliances and keep products going for longer.

The calculator includes an approximation of Shell’s future energy scenarios, which are explained in more detail on the oil company’s website.

The firm’s emphasis is, unsurprisingly, on meeting growing global demand for energy.

Neither of the two scenarios, which Shell dubs “mountains” and “oceans” hit the 2C goal. But with a range of 1.5C to 3.9C, they come significantly closer than IEA’s “business as usual”.

The Vegan Society, unsurprisingly, chooses the most extreme options available on diet.

The average citizen consumes 2,100 calories a day – no more or less than the target for healthy eating. Barely any of that comes from meat.

This is coupled with an “extremely ambitious” doubling of crop yields and drastic improvements in efficiency of land use to feed a population of 9.6 billion.

It is not clear why these herculean agricultural efforts would be needed for such a modest calorific intake – but then this is an emissions calculator, not a food calculator.

This approach means only moderately ambitious efforts are needed in technology and fuel use to meet the 2C threshold. 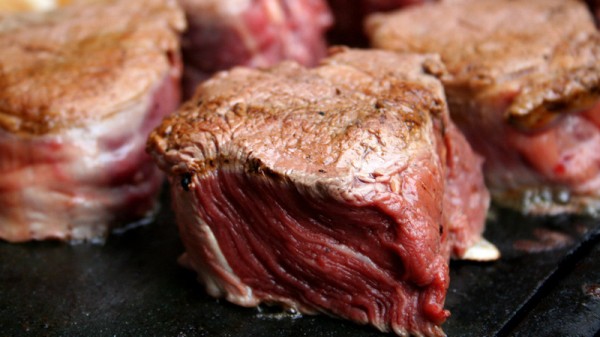 Steak has a bigger carbon footprint than pork or chicken (Pic: Flickr/Sheila)

By contrast, Chatham House considers the implications of a high meat world.

It assumes that by 2050, everyone is eating the same amount of food and meat as a typical European. It then skews the preferences towards ruminants – cows, goats and sheep – which produce methane, a potent warming gas.

This is bad news for the climate. Even with “very ambitious” choices in many of the other categories, this steak-heavy lifestyle implies warming of between 2.2C and 5.8C.

All of the example pathways input by DECC take the UN’s lower or central projection for population growth.

If people decide to breed more, meeting the 2C target becomes more challenging, but not impossible.

The easiest way to eliminate these extra emissions turns out to be cutting meat consumption down a notch.

If each person eats 152 calories worth of meat a day – the WHO recommendation for a healthy diet – rather than the 220 calories projected by the UN’s food agency, it puts the world back on a 2C path.