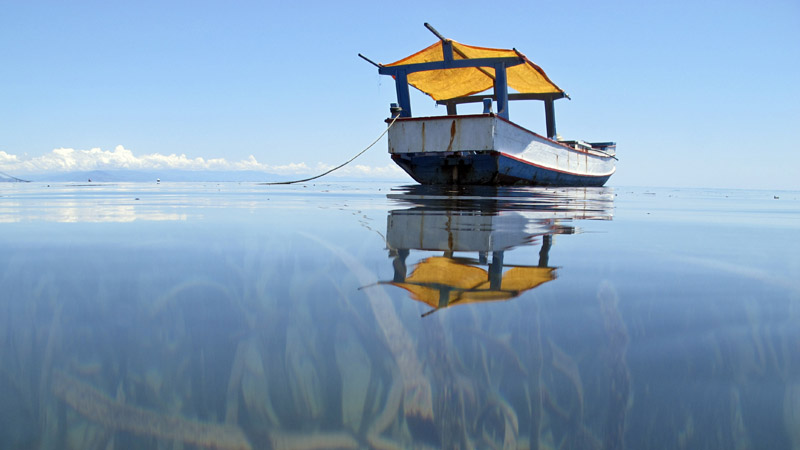 The warming oceans could start to return more carbon dioxide to the atmosphere as the planet warms, according to new research.

And since 70% of the planet is covered by clear blue water, anything that reduces the oceans’ capacity to soak up and sequester carbon could only make climate change more certain and more swift.

It is a process that engineers call “positive feedback”. And under such a cycle of feedback, the world will continue to get even warmer, accelerating the process yet again.

Many such studies are, in essence, computer simulations. But Chris Marsay − a marine biochemist at the UK’s National Oceanography Centre in Southampton − and colleagues based their results on experiments at sea.

They report in the Proceedings of the National Academy of Sciences that they examined sediment traps in the North Atlantic to work out what happens to organic carbon – the tissue of the living things that exploit photosynthesis, directly or indirectly, to convert carbon dioxide – as it sinks to the depths.

Sooner or later, much of this stuff gets released into the sea water as carbon dioxide. This is sometimes called the ocean’s biological carbon pump. In deep, cold waters, the process is slow. In warmer, shallower waters, it accelerates.

And as there is evidence that the ocean is responding to atmospheric changes in temperature, both at the surface and at depth, the study suggests that “predicted future increases in ocean temperatures will result in reduced CO2 storage by the oceans”.

The research was conducted on a small scale, in a limited stretch of ocean, so the conclusion is still provisional − and, like all good science, will be confirmed by replication. But it is yet another instance of the self-sustaining momentum of global warming.

Such positive feedbacks are already at work in high latitudes. Ice reflects sunlight, and therefore the sun’s heat. So as the Arctic ice sheet steadily diminishes over the decades, more and more blue water is available to absorb heat − and accelerate warming.

The same gradual warming has started to release another greenhouse gas trapped at the ocean’s edge. Natural “marsh gas”, or methane, is stored in huge masses, “frozen” as methane hydrate in cold continental shelves.

Methane exists in much smaller quantities than carbon dioxide, and has a shorter life in the atmosphere, but is far more potent, volume for volume, as a greenhouse gas.

Researchers at the Arctic University of Norway in Tromso reported last month in Geophysical Research Letters that once-frozen methane gas was leaking from thawing ocean floor off Siberia.

Some of this thaw is natural, and perhaps inevitable. But some is connected with human influence and could accelerate.

Alexei Portnov, a geophysicists at the university’s Centre for Arctic Gas Hydrate, Climate and Environment says: “If the temperature of the oceans increases by two degrees, as suggested by some reports, it will accelerate the thawing to the extreme. A warming climate could lead to an explosive gas release from the shallow areas.”

Arctic methane, like ocean organic carbon, has a biological origin. It is released by decaying vegetation under marshy conditions and tends to form as a kind of ice at low temperatures and high pressures, much of it along continental shelves that, at the height of the Ice Ages, were above sea level.

The International Union for Conservation of Nature also reminded the world last month that the ocean plays a vital role in climate, and that plankton, fish and crustaceans could be considered as “mobile carbon units”.

In this sense, the fish in the sea are not just suppers waiting to be caught, but are important parts of the planetary climate system. The healthier the oceans, and the richer they are in living things, the more effective they become at soaking up atmospheric carbon.

“The world is at a crossroads in terms of climate health and climate change,” said Dan Laffoley, vice-chairman of the IUCN World Commission on Protected Areas, introducing a new report on the marine role in the carbon cycle.

“Neglect the ocean and wonder why our actions are not effective, or manage and restore the ocean to boost food security and reduce the impact of climate change. The choice should be an easy one.”