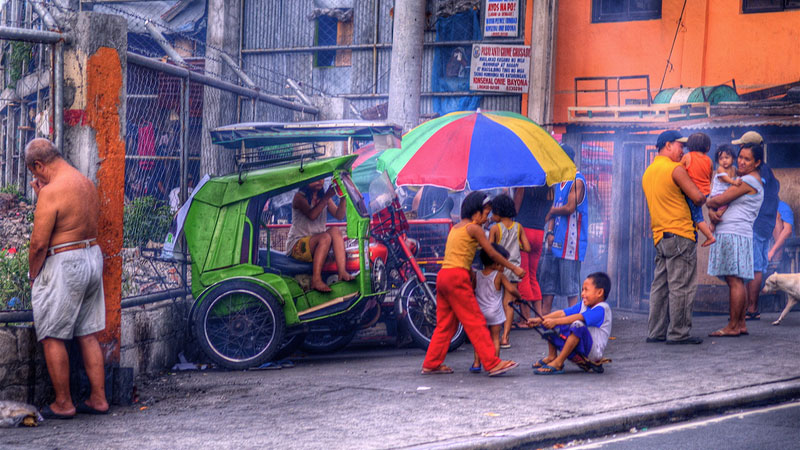 People on the streets of Manila, which has the highest population density in the world (Pic: Ville Miettinen/Flickr)

The Philippines’ rapidly growing population is increasing its vulnerability to climate change, according to a government document.

Around 92 million people live in the Philippines and the number is growing by 1.9% a year. The country has slipped recently from 12th to 3rd most vulnerable in the world to climate change.

“The large number of people and their migration patterns have led to crowded cities, waste and housing problems, pollution, and encroachment of upland forests and watersheds leading to denudation and, consequently, significant reduction of carbon sinks,” write the authors of the report.

In 1970, the population of the Philippines was 30 million. Population growth has slowed since then, but the number of people living in the country is nonetheless expected to double in the next thirty years.

The 102-page document was submitted to the UN’s climate body on 29 December. It outlines the country’s vulnerabilities, actions and constraints in tackling climate change.

The growth is mainly happening in urban areas, as Filipinos migrate towards cities. Since 2000, the number of people living in rural areas has been shrinking, the government reports.

Urban areas tend to be more at risk of flooding and earthquakes, which raises the pressure on the Philippines as rising temperatures are predicted to intensify the impacts of climate change.

The vulnerability of the Philippines was thrown into the spotlight in 2013 when Typhoon Haiyan made landfall, killing more than 6,000 people and forcing millions into temporary homes.

Heherson Alvarez, from the Philippines Climate Change Commission, told RTCC at the UN climate talks in December that the country was working on building its resilience in the aftermath of the typhoon.

“The government has been reorganised so at the grassroots we’re stronger at responding,” he said.

But the latest document speculates that inadequate measures in the Philippines could be one reason why it is becoming more vulnerable than other countries.

According to World Bank data, the Filipino population is increasing faster than in neighbouring countries Indonesia and Vietnam. But it is slower than many African countries, where growth rate in 2013 was more than 3%.

Not only is population growth increasing the country’s vulnerability, but it is also boosting its emissions.

“As the population and the economy grew, energy consumption increased, as well as transport use, and industrial activity in all the production and services sectors,” the document says.

“All of these meant greater use of the country’s agricultural, forestry and marine resources and increasing pressure on the natural environment.”

Total energy use has increased proportionally with population growth, it notes.

Greenhouse gas emissions from road transport – which makes up 36.8% of total energy demand – is predicted to rise from 24 million tonnes of CO2 today to 87 MtCO2 in 2030.

Forest cover in the Philippines has also been reduced from around 27.5 million hectares in the 1500s to around only 7.2 million today. Many of the causes – including logging,  agriculture and unplanned land conversion – have been worsened by population growth.