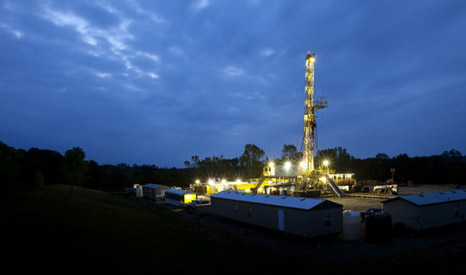 Fracking was responsible for an earthquake felt by Ohio residents in March 2014, a study has found.

Hydaulic fracturing near the Poland Township activated a previously unknown fault in the earth, say scientists, who identified 77 earthquakes with magnitudes ranging from 1.0 to 3.0 between March 4 and 12.

The strongest earthquake was unusual because it could be felt by people living in the area, revealed the research, published online in the Bulletin of the Seismological Society of America.

“These earthquakes near Poland Township occurred in the Precambrian basement, a very old layer of rock where there are likely to be many pre-existing faults,” said Robert Skoumal, co-author of the study.

“This activity did not create a new fault, rather it activated one that we didn’t know about prior to the seismic activity.”

In October 2014 another study in the same journal suggested 400 small earthquakes in Ohio were triggered by fracking in a three month period during 2013.

Report: Future of fracking in doubt as oil prices spiral

Fracking creates fractures in shale rock to release the fossil fuels trapped inside by injecting a mixture of water and chemicals at high pressure.

The technology has been widely adopted across the US, but in Europe the method is still controversial.

Earthquakes – both felt and unfelt – have increased over the past decade as the popularity of fracking has increased.

The drilling in Ohio was undertaken by Hilcorp Energy, which halted operations on 10 March after the 3.0 magnitude earthquake.

But the fact that no earthquakes occurred at nearby industrial areas suggests that the fault that was activated is limited in extent, concluded researchers.

The risk of earthquakes is frequently cited by anti-fracking campaigners as a reason not to embark upon the new method of extracting oil and gas.

Oklahoma’s fivefold increase in earthquakes during 2014 has led many residents to claim a link to the oil and gas rush. Well over 30,000 oil and gas wells litter the landscape, employing 1 in 6 of the state’s population.

Last year the Oklahoma experienced 564 quakes above a magnitude of 3.0. According to the EnergyWire website that makes it the most seismically active state in mainland US.

Governor Andrew Cuomo banned fracking in New York State in December. Earthquakes were among the risks cited in the 184-page report that underscored the decision, along with concerns over drinking water and climate change.

Skoumal underlined the difficulty of knowing when an earthquake will occur, and said it meant drilling companies and local authorities needed to evaluate risky areas carefully before proceeding.

“We just don’t know where all the faults are located,” he said.

“It makes sense to have close cooperation among government, industry and the scientific community as hydraulic fracturing operations expand in areas where there’s the potential for unknown pre-existing faults.”