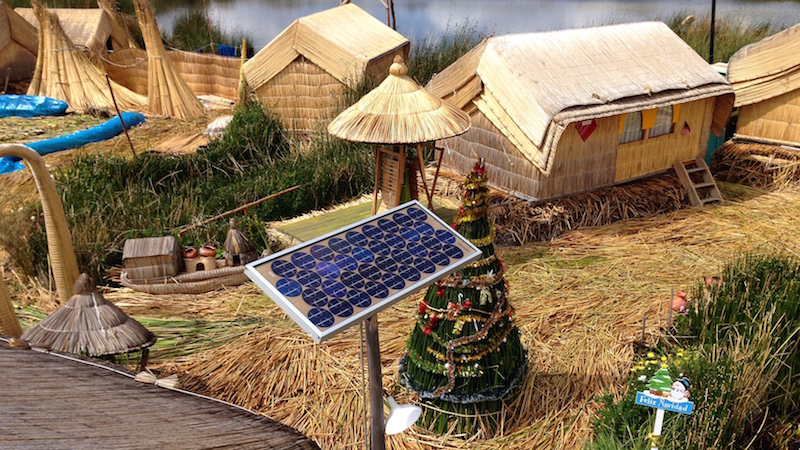 Some say that this indigenous race dates back some 3,700 years to when the central Andes were first settled.

Forced onto the islands of totora reeds by colonising Incas, they have since spent their days rebuilding and replacing the spongy foundations of their homes.

Separated from the mainland, the Uros people have retained many of the habits of their ancestors. But when it came to solar technology, they were early adopters.

Victor Vilca, who lives on Uros Khantati, one of more than 50 floating islands in the lake, says that the islanders started using solar panels to provide electricity around 25 years ago.

He has now installed six solar panels on his own island, where he lives with his wife, children and three other families.

And the inhabitants of the other islands have also turned to the technology, he says.

While the use of solar panels around the world has boomed in the past two decades, the sun in Peru is still only responsible for around 0.02% of domestic energy supply, according to the International Energy Agency.

This could change. Earlier this year the government issued plans for 500,000 new panels in remote areas, part of a strategy to boost electrification from 90 to 95% in rural areas.

Vilca spoke to RTCC one week after the UN’s climate conference had concluded in Lima, putting Peru’s own carbon footprint – and its vulnerabilities – into the spotlight.

Lake Titicaca, which at over 12,000 feet is the world’s highest navigable lake, is already vulnerable to climate change.

In 2009, the Lake Titicaca authorities said that the lake was at its lowest level since 1949 due to evaporation caused by global warming.

Diminished rainfall and a rise in solar radiation had led to four years of critically low water levels were threatening fish spawning and water levels, they said.

A 2010 academic paper suggested that Lake Titicaca could shrink by as much as 85% if temperatures rise more than 2C. This is the limit set by world governments, but current emission rates mean this will be far exceeded by the end of the century.

Images from NASA satellites illustrate that the edges of the lake are already receding. This spells trouble for the 2.6 million people who depend on the lake for sustenance through irrigation and fishing.

But the popularity of the technology among some of Peru’s remotest communities illustrates how clean energy has advantages beyond a mere replacement for fossil fuels.

The incentive for Peru’s remote islanders to use solar power is less about reducing their negligible greenhouse gas emissions, and more about the co-benefits that they offer. 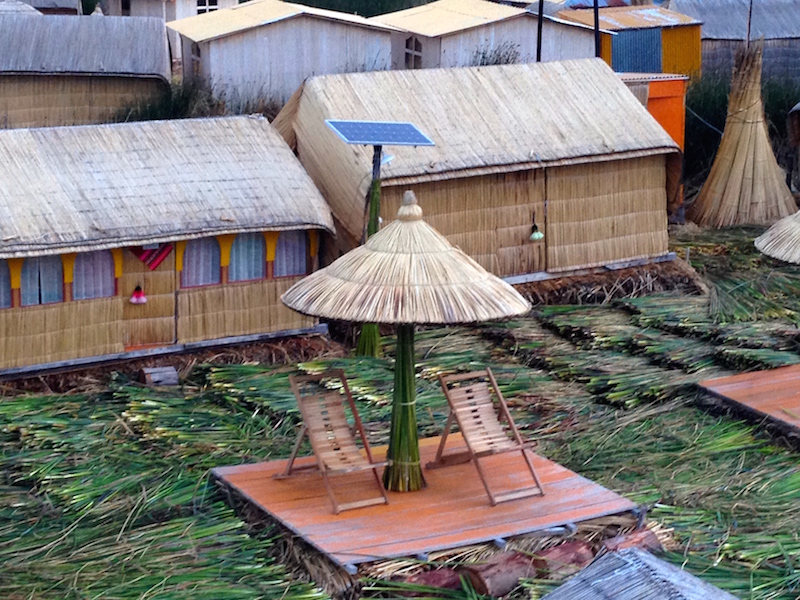 Solar panel catches the last of the light at dusk on Uros Khantati (Pic: Sophie Yeo)

As the Uros islands are only accessible by boat, transporting barrels of diesel or coal to be ignited on highly flammable islands of dried reeds was never a practical solution to the islanders’ energy requirements.

Now each house on his island has an electric bulb, and occupants are able to charge their mobile phones.

These modern amenities make a night on the island more attractive for Peru’s plugged-in visitors, keen to get a glimpse at the unusual sight of these reed homes bobbing on top of the lake.

With 80% of the islanders now catering for tourists, it has become key to sustaining the lives and culture of these fragile communities.