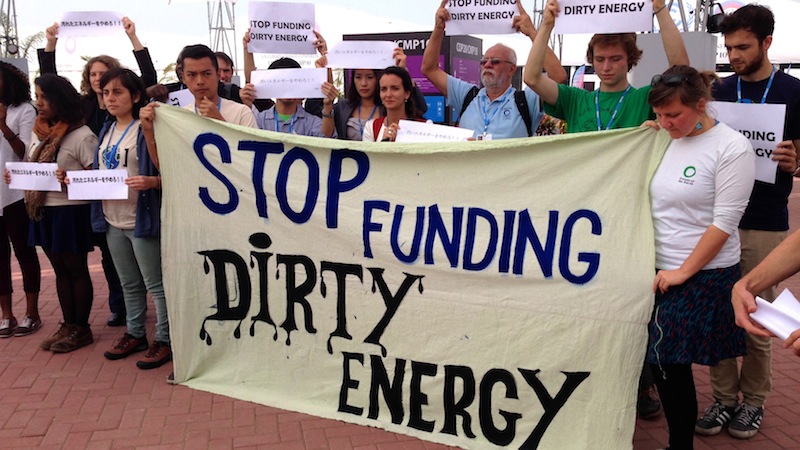 The world’s investors – both big and small – think primarily in terms of making good returns on their money. And, over the years, investing in the fossil fuel industry has been considered a safe bet.

Yet maybe, just maybe, attitudes are changing – and fairly profoundly – as financial analysts warn that the industry faces “a perfect storm” as it enters 2015.

On one side, CTI says, the industry is being buffeted by a crash in oil prices and a drop in demand. On the other, there’s the threat of increasing regulation aimed at cutting GHG emissions and a worldwide growth in renewable forms of energy.

“At one stage, when we talked to investment firms about the risks of investing in fossil fuels we were given a cool reception,” Hobley told Climate News Network.

“Now we are being invited to brief the big investment funds. Investors have an enormous amount of power – they are weighing up the risks of investing in fossil fuels and wondering just how safe their money is.”

The CTI has long warned of the dangers of a “carbon bubble”, with investments in fossil fuels becoming ”stranded assets” due to the imposition of stricter regulatory controls on emissions and the widespread adoption of renewable energy.

“The carbon bubble is not going to burst in 2015,” Hobley says. “The transition from fossil fuels to other forms of energy is going to take place over several decades.

“But a combination of more regulations, new technologies, the falling price of renewable energy, and the need for a more efficient use of resources, is making investors rethink their investment strategies.”

Energy companies are also reconsidering their plans. EON, Germany’s largest power utility, announced earlier this month that it would be reorganising its structure in order to focus on the development of renewables.

A worldwide campaign calling for divestment from fossil fuels is another factor causing some concern in the boardrooms of the big fossil fuel companies.

The industry is powerful and, despite the problems it’s facing, it is unlikely to collapse anytime soon. But it has been severely damaged by recent events.

Goldman Sachs, the global investment bank, says a trillion dollars of investments in various oil and gas projects around the world are at risk − or stranded − due to the fall in oil prices.

A rapid rise in production from US shale deposits in recent years has caused a glut on the global oil market.

Analysts say a significant slowdown in the rate of economic growth in China is also a major factor behind the present fall-off in oil prices, and in the big declines in coal prices on the world market.