Crowdsourcing US$125,000 proves a novel way to solve water shortages in a remote mountain region of India 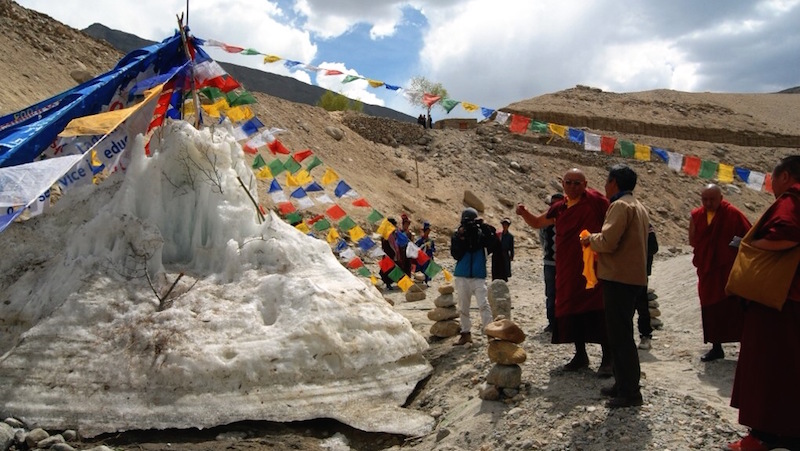 By Sanjay Pandey in Ladakh

“If you cannot stop it, adapt to it.”

This is the mantra of a tiny village — situated on the slopes of breathtaking Himalayan desert mountains of Ladakh — to survive climate change in the extreme north of India.

With the glaciers they depend on for water melting too fast in summer and not enough in the spring planting season, the farmers of Phyang struggle to grow the crops they need.

Help is at hand from engineer Sonam Wangchuk, who has raised US$125,000 through US-based crowdfunding website Indiegogo to create a series of “ice stupas” that promise to solve the water scarcity crisis.

“Though we have little or no contribution in climate change, we are at the receiving end of it,” Wangchuk told RTCC.

Under his project, Wangchuk wants to build “ice stupas” – or artificial cones of ice – that store water for crops to combat shrinking glaciers.

Wangchuk is not the first one to come up with the idea of an artificial glacier. His mentor Chewang Norphel earned the nickname “ice man” for pioneering work in the area.

But Norphel’s creations had limitations, in that they would have to be built above 4,000 metres and in locations that were shaded by a mountain on the south.

If not built in specific location, the glaciers would melt away before crucial, months of April and May when farmers needed water for irrigation.

This difficulty in walking up and down the mountains made it extremely difficult for the villagers to maintain the glaciers.

“With ice stupa formed of artificial glaciers, I tried to fix these limitations,’ said Wangchuk.

Wangchuk realised the melting speed of artificial glaciers was linked to the surface area exposed to sun and wind.

“The challenge was make ice last (that too in the lower altitude through) May and June, when the farmers needed it the most. Then, I thought the shape of the ice was key.”

The conventional glaciers would be 2 metres deep and spread over a wide area. Wangchuk’s brainwave was to make them taller, reducing the surface area for the same volume of ice.

The challenge was to store water vertically without pumps and power. Wangchuk figured out how to use gravity to get the shape he wanted.

“Look, every Ladkhi village is sloping down and the water starts at a higher point and flows down towards the Indus,” he explained.

“We can just put a pipe upstream higher than the height of the glacier that you want. If you want a 100 ft glacier then place the pipe 120 ft higher up and let the pipe come down along the slope. When it comes down the desired water would naturally rise to almost the same height.

“This not only gives you the way of making a conical shape, it gives you protection from the sun’s intense heat in places like Ladakh.”

The founder of the SECMOL alternative school started working on the hypothesis and last winter tested the prototype.

Within two months, Wangchuk’s team built a two-storey ice stupa that could store around 150,000 litres of water. This prototype was put to test. Built at the warmest possible location and lowest possible altitude on the banks of the Indus river at a height of 3,200 metres, it lasted till May 18.

“That’s all we needed. Now, we are going to make ice stupas 100 times bigger than the prototype. The chances are that it will last though July and August. In this case, it may last the whole summer and go into next winter. This will mean they are actually seen as glaciers,” said the engineer.

The full sized stupas will be 35 metres to 40 metres high and store up to 16,000 cubic meters of water each — enough to irrigate 10 hectares. Eventually there will be up to 80 such stupas.

Buoyed by their success, Wangchuk and his five-member team plan to construct 80 to 90 ice cones in the vast deserts of Phyang village that houses some 2,000 people, most of them farmers.

These stupas will be 100 times bigger than the prototype and if all goes to plan, will easily meet the water needs of people till the end of June.

In the past when the people of Ladakh built stupas, they would donate labour. As the internet has made the world a global village, Wangchuk’s team appealed to the global citizen for help through crowdfunding worldwide. And the response was overwhelming.

On Tuesday 23 December, Phyang Monastery and SECMOL school announced that their ambitious Ice Stupa Project had exceeded its US$119,500 target on the American crowdfunding platform Indiegogo. More than US$125,000 was raised as part of the campaign. Around 330 contributors from 31 countries donated for the cause.

Engineers and volunteers along with the villagers and monks of Phyang have started working on the project.

The water from these ice stupas would help the villagers in the crucial planting months of April and May, as well as helping them green a vast patch of desert.

Once this project is scaled up, these ice stupas are expected to hold enough water to green 1,500 acres of hard desert land, said Wangchuk.