Rainforests are the “sweat glands” of the world and losses could wreak havoc with farming, researchers warn 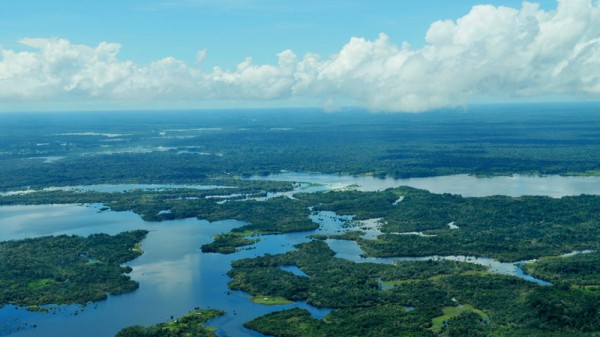 Cutting down rainforest has long been known to release carbon dioxide, contributing to global warming.

It also has direct impacts on rainfall and temperature, US researchers have found, which could wreak havoc with farming worldwide.

In the Amazon, deforestation is already shifting once-predictable rainfall patterns, a report published in Nature Climate Change on Thursday showed.

If all the world’s tropical forests were wiped out, it would hike global temperatures 0.7C, on top of the effect of greenhouse gas emissions.

“Tropical deforestation delivers a double whammy to the climate—and to farmers,” said Deborah Lawrence, lead author and professor at the University of Virginia.

“Most people know that climate change is a dangerous global problem, and that it’s caused by pumping carbon into the atmosphere.

“But it turns out that removing forests alters moisture and air flow, leading to changes—from fluctuating rainfall patterns to rises in temperatures—that are just as hazardous, and happen right away.” 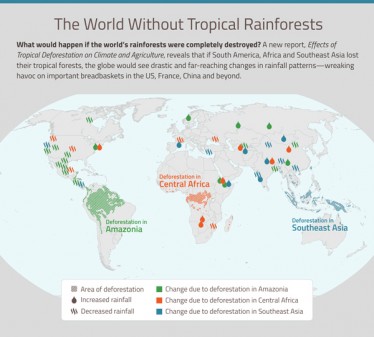 As more trees are cut down, the effects could spread to some of the breadbaskets of the world, the researchers warned.

The US Midwest and southern France would get less rainfall, while the UK and Hawaii would get wetter.

The report, which offers the most comprehensive analysis of the issue to date, is significant for climate modellers and policymakers.

It makes clear greenhouse gas emissions are not the only cause of climate change and deforestation can have a direct impact.

“Tropical deforestation impacts weather patterns globally, which makes addressing deforestation one of the most important mitigation strategies,” said Charlotte Streck, director of Climate Focus, which contributed to the research.

Trees draw water from the soil and release it through their leaves as water vapour, which cools the air around them.

Clearing small areas of forest can actually increase rainfall locally, the study found, but on a larger scale it “dramatically” cuts rainfall.

“Tropical forests are often talked about as the ‘lungs of the earth,’ but they’re more like the sweat glands,” said Lawrence.

“They give off a lot of moisture, which helps keep the planet cool. That crucial function is lost – and even reversed – when forests are destroyed.”

Models suggest there is a tipping point of 30-50% of the Amazon and Congo rainforests, beyond which additional tree loss would significantly alter ecosystems.

The other major stretch of tropical forest, in southeast Asia, is understood to be less significant to global weather patterns as it is surrounded by oceans.

“What happens on the surface of the earth (in terms of changes in vegetation) is a big factor in climate change,” she said. “We ignore it at our own peril.”