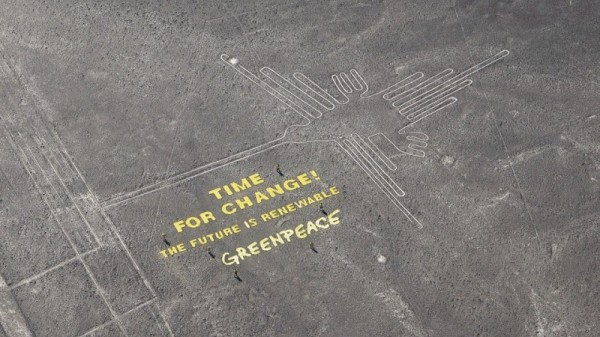 The message laid out by activists as UN climate talks started in Lima
(Pic: Facebook/Greenpeace International)

Greenpeace has promised to make amends to the Peruvian people after activists damaged one of its treasured heritage sites.

While laying out a message promoting renewable energy, the activists left a trail of footprints in the delicate terrain around the Nazca Lines.

The Peruvian government has threatened to extradite the suspects, who were in Lima for UN climate talks. They face up to six years in jail for “attacking archaeological monuments”.

Kumi Naidoo, head of the environmental group, travelled to Peru in a bid to defuse the situation.

In a video apology, he said: “There is no question we have done wrong. Greenpeace should never have done the activity at the Nazca Lines. We made a mistake.”

He committed to “explore all options” to repair the damage, following the recommendations of an independent report.

“I apologise personally to the people of Peru and all those around the world who were offended by our actions,” Naidoo added.

But Peru’s culture minister, Diana Alvarez-Calderon, on Monday described the damage as “irreparable”.

Greenpeace has refused the authorities’ request to name those involved in the stunt.

“We don’t think any deals can be made if they don’t tell us who went and caused this damage,” said Alvarez-Calderon.

She expressed regret that the action happened during the UN climate conference, which Peru was “proud” to host.

The Nazca Lines are a series of images scratched into the desert 1,500 to 2,000 years ago, at a scale only visible from the air.

Nobody is allowed on the protected site without authorisation and specialised footwear.

The activists laid out fabric letters reading “Time for change! The future is renewable”, followed by the Greenpeace logo, next to a hummingbird figure.