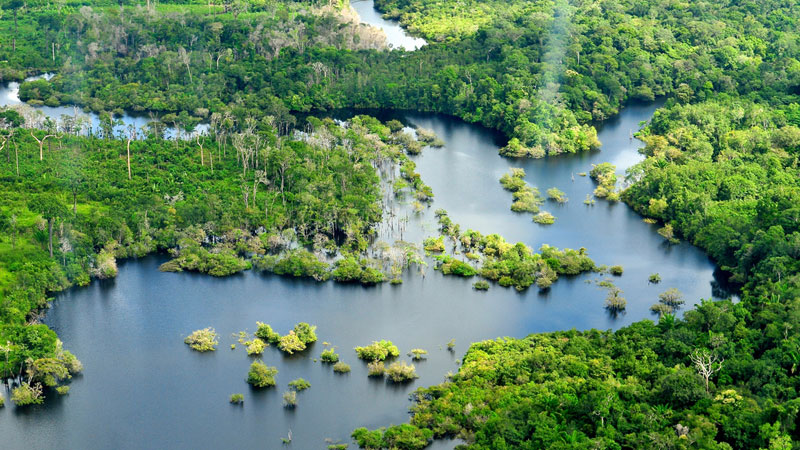 He looks at its critical functions for human society, its destruction through deforestation and fire, and he discusses what needs to be done “to stop the runaway train that the climate has become since human occupation in forest areas”.

The report talks of the Achilles’ heel of Amazonia − the danger that the invincible hero will fall – and warns that its future climate has already arrived. Approximately 20% of Brazil’s Amazon forest has been clear cut, while forest degradation has disturbed the remaining forest to varying degrees − directly affecting an additional 20% or so of the original area.

Dr Nobre says there are clear indications that a reduction of approximately 40% of the rainforest may trigger a large-scale transition to a savanna landscape over time. “There is no doubt,” he says, “that deforestation, forest degradation and associated impacts have already affected the climate both near and far from the Amazon.”

He spells out the sheer scale of the devastation: the total deforested area is greater than the size of two Germanys or two Japans. It is equal to 184 million football fields – which means that, over the last 40 years, the equivalent of 12,635 football fields have been deforested per day.

Dr Nobre is critical of the Brazilian government’s recent claims that deforestation is falling.

He says: “There is no reason whatsoever to celebrate the relatively lower rates of clear-cutting in recent years, especially since − after the adoption of the new Forest Code (2011), with its wide amnesty for those who deforested − a distinct tendency towards further increases in the annual rates has already been observed.”

So concerned is Dr Nobre about what is happening that he believes only a virtual war effort can save the rainforest. His battle plan – with ignorance the first enemy to overcome − has five steps:

1. Popularising forest science: On the basis that knowledge is power, scientific facts about the role of the forest in creating a friendly climate, and the effect of deforestation in leading to an inhospitable climate, must become common knowledge.

2. Zero deforestation: The harm deforestation does to human beings and the economic losses it causes should be compared with that of tobacco, Dr Nobre argues. When Brazil introduced a new Forest code that scaled back protection, the consequences of changed land use on the climate were never discussed by the politicians. While economic growth and market demand create pressures that leads to deforestation, planning weaknesses foster the invasion and occupation of forested areas − and all these loopholes must be sealed urgently.

3. An end to fires, smoke and soot: Using fire as a tool for clearing land is a deeply ingrained habit that must be stopped. The fewer sources there are of smoke and soot, the less damage will be done to the formation of clouds and rain, resulting in less damage to the green-ocean rainforest.

4. Recover and regenerate forest: Stopping deforestation is not enough to reverse threatening climate trends. “We must regenerate, as widely as possible, all that has been changed and destroyed,” Dr Nobre says. Reforestation on such a scale implies a reversal of land use in vast areas that are now occupied − difficult in the current scenario − and land zoning technologies will be needed.

5. Governments and society need to wake up: In 2008, when the global financial bubble burst, governments around the world took just 15 days to decide to use trillions of dollars of public funds to save private banks and avoid what threatened to become a collapse of the financial system. The climate crisis has the potential to be immeasurably worse than any financial crash, yet still there is procrastination − despite the abundance of scientific evidence and of viable, creative and appealing solutions.

In a final warning, Dr Nobre’s report predicts that climate chaos “has the potential to be immeasurably more damaging than World War II. What is unthinkable today may become an unavoidable reality sooner than expected.

“China, with all its serious environmental problems, has already understood this and has become the country with the most ongoing reforestation activities.

“Restoring native forests is the best bet we can make against climate chaos, and is the only true insurance policy we can buy.”