Bangladesh: Poor nations expect too much climate aid from west 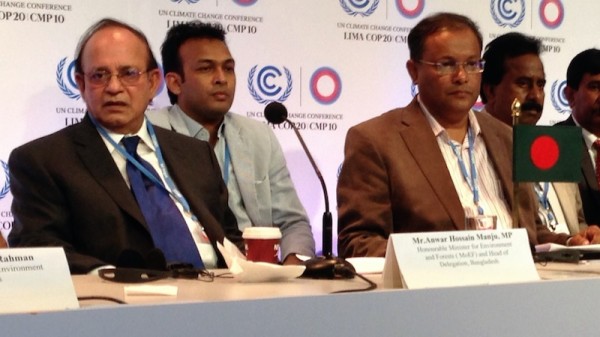 Poor countries have been piling too much pressure on the rich west, Bangladesh’s environment minister Anwar Hossain Manju has suggested.

“We are probably expecting too much from the industrialised and developed countries, because today all countries are suffering from social, political, economic problems,” he said.

He pointed out that war and unemployment had sapped financial resources.

“It’s not a question of expecting anything particularly from any country or organisation,” he said. “Our approach is let us put our hands into our pockets and see how much we can afford. No country can do everything.”

The government of Bangladesh has invested $10 billion over the last three decades in preparing the vulnerable country to the impacts of climate change.

After two weeks of UN talks in Lima, countries are still behaving sluggishly in the face of climate change.

Come Thursday night, parties are supposed to have written a text that will determine what kind of ambition they will put forward before the final UN deal is signed in Paris next year.

But instead of being whittled down into bite-sized options, the text is expanding. This morning, it was 52 pages long, said EU climate commissioner Miguel Arias Cañete, having ballooned from 12 pages at the beginning of the week.

And while the options and opinions have multiplied, no paragraphs had yet been agreed.

“Progress is much slower than we want and need,” said Cañete.

On finance there have been some celebrations. The wayward Australia finally dug into its pocket, and the Green Climate Fund has hit its $10 billion target.

Not everyone is impressed.  “It’s peanuts,” says Abdul Momen, Bangladesh’s ambassador to the UN. And most of it has been pledged over a four year period. “I would expect that $10bn should be spent by next year and we should move forward with more money.”

Pledging countries have received congratulations, even those whose contributions amount to a pittance in the face of their fair share.

Brandon Wu from Action Aid said that Australia’s $165 million pledge ought to have been around $271 million for it to be considered its fair share.

Neither did European countries escape censure. Austria’s $25 million pledge today should have been around four times higher if the country is to keep up with its neighbours in Germany, said Christiane Brunner from the country’s Green Party.

It was only around half a year ago that the head of the Green Climate Fund called for $15 billion to be in its coffers by the UN talks – a call that was backed by developing countries including Nauru and Fiji.

Bolivian president Evo Morales delivered a lengthy speech yesterday that was fiercely at odds with the forgiving view of the Bangladeshi minister.

He said that rich countries were thieves who were stealing the belongings of others.

“There are countries that do not want to reduce emissions domestically or do anything to help developing countries,” he said.

Other Bangladeshi officials were also quick to point out that they were not giving up on greater help from rich countries.

The compromise that the least developed countries had made was that they were only asking for billions, said Momen. The actual demands of climate change would require “trillions and trillions”, he said.

MP Hasan Mahmud added that many were frustrated: “All the developed parties committed a lot and delivered very little,” he said.

Meanwhile, US climate envoy Todd Stern said that he was not concerned at the slow pace of the negotiations, which he said were usual at this stage of the UN talks.

“I don’t think we’re in any kind of danger zone with respect to time,” he said.

He added that the draft version of the Paris negotiation text was basically completed, with all the options laid out for countries to discuss over the coming year.

This is different from the text that determines countries contributions to the deal, which has to be completed in Lima.

He emphasised that the US refusal to accept an approach to these that treats rich and poor countries differently had not changed.

The level of information that countries should provide is not so complicated that it should scare countries off, he said. “What needs to be provided is really quite simple.”