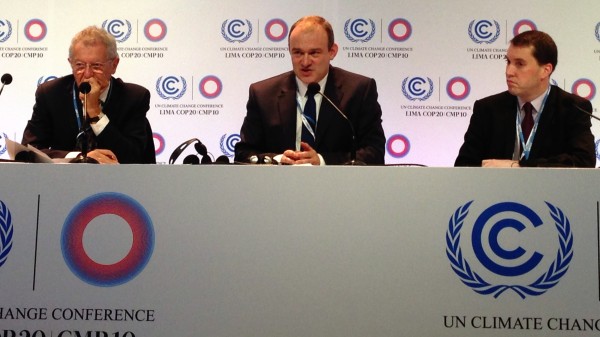 Oil, gas and coal producing states should not be offered financial assistance to help them cope with falling demand for their products in the event of a UN climate deal.

That’s the view of UK secretary for energy and climate change Ed Davey, who wants countries to agree ambitious plans to radically slow the level of greenhouse gases emitted into the atmosphere.

Many leading oil producers say a tough deal would unfairly penalise them, and have argued they need more support from the world to diversify their economies.

Speaking to reporters in Lima today, Davey rejected a Saudi Arabian proposal that rich countries should help oil dependent economies as they phase out fossil fuels in order to tackle climate change.

“I don’t think we’ll be focusing on compensation in Saudi Arabia,” he said, adding that Saudi and other Gulf states have been already benefited financially from their fossil fuels reserves.

Saudi Arabia has the second largest oil reserves in the world after Venezuela, which provides 45% of its GDP.

The UN climate deal, which countries are working on in Lima, could threaten the wealth of Gulf states, with some countries pushing for a zero-emissions world by 2050. This would require a rapid phase out of fossil fuels.

“If this agreement does not cater for the concerns of, and the vulnerabilities of all parties, not only the oil producers but small island states and others, we are not going to help the process,” Khalid Abuleif, Saudi Arabia’s lead climate negotiator told the Financial Times.

Instead of pushing for international support for financial assistance, Saudi Arabia should focus on diversifying its economy itself by investing in renewables, said Davey.

In 2009, the country announced that it was planning a $109 billion investment in the solar industry that would generate a third of the nation’s electricity by 2032.

Saudi Arabia has a “a very ambitious programme of investing in solar and there are other Gulf states investing in other renewable technologies; some are investing in nuclear, and so on,” said Davey.

“That is a sensible way forward. It’s what other countries have to do.”