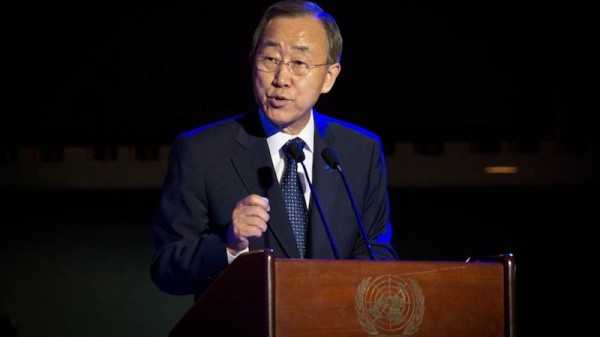 UN climate talks in Lima have succeeded in capturing the momentum of the New York climate summit, according to UN secretary general Ban Ki-moon.

“I see the signs of optimism and the positive willingness to engage among others, between the developing and the developed world,” he told reporters on Tuesday.

The fact that countries have started to discuss a text that could form the basis of negotiations next year in Paris is evidence that a positive spirit has been carried forward from the New York summit, said Ban.

In September over 100 world leaders gathered in Manhattan to pledge support for a UN climate deal. The meeting also saw significant promises made to curb deforestation and place a price on carbon.

A draft agreement for a proposed 2015 climate deal has no formal standing in the Lima, and contains many difficult options that will have to be whittled down before countries agree to it next year.

The UN wants the basis of a text agreed by the end of this week.

Ban expressed hope that countries would start formally negotiating on the document, making this meeting the start of work building up to Paris, where next year’s climate conference will be held.

“This is very important,” he said, adding that it would provide a “clear and solid foundation” for the talks.

#adp discussing item 3. Co-chair: Will you die in a ditch for article 17 ? #cop20 pic.twitter.com/bJ6TlTnJi4

The secretary general will meet with negotiators and leaders while here in Lima, and is “cautiously optimistic” that there will be a good outcome by the end of next week.

Outside of the negotiations in Lima, a joint announcement by China and the US, the world’s two largest emitters, had shown that the world was responding to the climate challenge, said Ban.

However, he avoided any clear endorsement of either a 2050 decarbonisation target or the divestment movement, which tries to persuade organisations and companies to pull their investments from the fossil fuel industry.

“Practically speaking, in the real world, fossil fuel may have to continue to be used as our energy source,” he said.