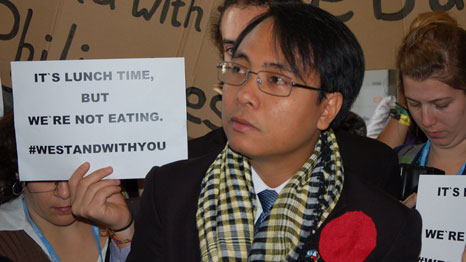 Mystery surrounds the absence of one of the most colourful and vocal climate diplomats from UN climate talks taking place in Lima, Peru.

Yeb Sano led the Philippine delegation at the 2013 summit in Warsaw, making an emotional appeal for urgent action in the aftermath of Typhoon Haiyan, which left 6000 dead.

Lately Sano had embarked on a 1000 kilometre walk across his country to raise awareness for climate impacts, but intended to finish in time for the Lima talks.

In an email to RTCC yesterday he said he would not be in Peru, but gave no further details.

But in a series of tweets today Sano, a government official at the Climate Change Commission, suggested there had been efforts to shut him out of the talks, silencing the views of a high profile and popular figure.

If my silence is not understood, then my words will be more meaningless. #YebInLima?

Sometimes, silence is the most powerful scream.

Speaking to RTCC, Heherson Alvarez, former Senator and member of the Philippine delegation said it was still unclear why Sano had not been admitted.

“I don’t know, I have to raise this issue and investigate it, because I don’t like it,” he said.

Some commentators have suggested the US could be behind Sano’s absence, keen to push one of its fiercest critics out of the process.

“People are scratching the heads as to why Yeb is not on the delegation anymore. He is a ray of light in an often dark process and I hope he has not been excluded from the delegation because some people don’t like the important truth he tells.”

The Philippines has also pulled out of the Like Minded Developing Group of Countries (LMDC), an alliance that frequently clashes with the US and EU at climate talks.

Asad Rehman, head of climate change at Friends of the Earth International suggested it could be due to pressure from larger countries on the Manila government.

Negotiations are now entering a critical stage, with just over 12 months till a global agreement to curb greenhouse gas emissions is scheduled to be signed in Paris.

Alvarez dismissed any link with the US, but said he had raised the issue with Richard Kinley, the UN’s deputy lead climate official, and also with the country’s lead official Mary Ann Lucille Sering.

“It’s difficult to understand how this could happen,” he added, revealing that until two weeks ago Sano’s name had been on a list for Lima.

“Why should these guys be leading? They are like guys heading through a revolving door,” said Alvarez. “Very bright diplomats but they only stay there for one or two months and then they are gone.”