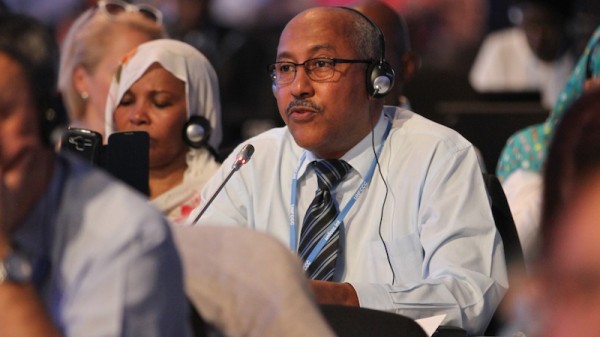 A tense atmosphere marked the beginning of today’s UN climate talks in Lima, as African countries accused co-chairs of driving an imbalanced process.

All the 196 countries involved in the negotiations met this morning for their first round of formal discussions on the UN’s climate agreement, which is set to be signed in Paris next year.

Talks in Lima are expected to lay strong foundations for this deal, but many parties expressed unhappiness with how the process had been conducted so far.

Some negotiators expressed concern that the paper prepared by the co-chairs did not treat adaptation and finance with the same importance as emissions reduction commitments. Poorer countries want assurance that they will have the support they need to make the transition to a low-carbon economy after the new climate change deal is signed.

Nagmeldin El Hassan, who chairs the Africa Group of countries in the talks, said that the views of his bloc had not been accurately represented, and that the input of poor countries was not treated on an equal footing with the rich. “The text is imbalanced,” he said.

His criticisms were directed at the co-chairs of the talks, Kishan Kumarsingh from Trinidad and Tobago and Artur Runge-Metzger from the EU, who compiled an informal version of a draft text, which summarises the views of all parties submitted so far.

While it is the countries which will negotiate the content of the agreement, this text streamlines the process in the interests of speeding up the work, which has to be ready by May.

Christiana Figueres, the UN’s chief climate official, referred to the 23-page document as a “draft agreement” at a press conference yesterday, suggesting she is happy with the way the document was drawn together.

But, said El Hassan, the submission of the Africa Group were “not accurately reflected”.

His views were echoed by a delegate from Cuba, who spoke on behalf of the Likeminded Developing Countries alliance. “We’re highly concerned that this process will not move forward in an inclusive and transparent manner,” he said.

The power struggle between rich and poor countries at the UN climate talks is at the heart of the debate.

While each country is meant to be treated equally at the negotiations, poorer nations can struggle to make their voices heard against their politically dominant counterparts in the west.

In depth: Paris climate deal could be based on carbon budget

A negotiator from Belize condemned the traditional use of “huddles” to overcome difficult issues in the talks – an efficient but exclusive practice where the richest countries and biggest emitters thrash out the final agreement among themselves in the final moments of the talks.

However, the censure has not been universal. Nepal, speaking on behalf of the least developed countries at the UN climate talks, said that he felt the text was “reasonably balanced” and accurately reflected their own submission. “We hope to formalise the elements text in Lima,” he said.

Switzerland, speaking on behalf of a group of countries that also includes Mexico, Liechtenstein, Monaco and the Republic of Korea, supported the co-chairs and said they were happy to work on the basis of their paper.

Jennifer Morgan, head of climate at the World Resources Institute, told RTCC that creating a balanced text was a “challenging exercise”, but emphasised that it was important that countries start to engage practically on what they had produced.

“If parties don’t think their view has been included, that’s what Lima is about: making sure everything gets included,” she said. “I would urge everyone to be practical about it now and get down to the details. We don’t have a lot of time.”