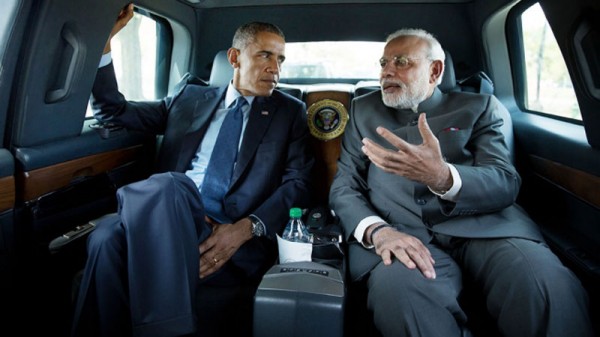 US efforts to encourage China and India to take action to curb their use of potent greenhouse gases used in refrigeration have paid dividends, with both countries agreeing to accelerate negotiations.

Leaders in Beijing and Delhi were lobbied hard by President Barack Obama to participate in efforts to phase out hydrofluorocarbons (HFCs), super potent heat-trapping greenhouse gases, under the UN’s ozone busting treaty, the Montreal Protocol.

At a meeting of the 180 parties to the Montreal Protocol in Paris this week, China and India joined Brazil, South Africa, the EU and US in agreeing to target steps to cut HFC growth, which scientists say could contribute to 0.5C of warming by 2100.

“This is the only climate strategy where all the major countries of the world are lining up on the same side,” said Durwood Zaelke, President of the Institute for Governance & Sustainable Development, who is attending the negotiations in Paris.

David Doniger, policy director at the Washington-based NRDC thinktank said it was vital countries moved quickly to come to an agreement over gases that are thousands of times more potent than carbon dioxide.

“Because those markets are growing so fast, if the HFCs aren’t nipped in the bud, they will undo all the positive effects of the Montreal Protocol by 2050,” he said.

The news will be another boost to UN efforts to secure a climate change deal, coming a day after $9.3 billion was offered to an international Green Fund aimed at helping poor countries cope with the oncoming effects of global warming.

Despite announcements by India prime minister Narendra Modi and China’s Xi Jinping that they would target HFC use before this meeting, it was unclear whether their negotiating teams would relax their previously tough stance at these talks.

Some developing countries argued that HFCs should be discussed at the UN climate talks, where efforts to tackle climate change are divided according to a nation’s level of development and financial capacity.

India, China, Saudi Arabia and Kuwait are concerned about the costs and effectiveness of replacements for HFCs. Air conditioning is vital for many warmer countries which experience searing summer temperatures.

Speaking at the meeting, India’s environment minister Prakash Javadekar said talks must respect economic differences between parties, saying they should be based “on the principle of grace period – that is differentiated responsibility, financial assistance, including that for research and development, technology transfer without the clause of confidentiality.”