Editor Ed King reflects on a lively 36 months at the helm, as countries edge towards agreement on tackling global warming 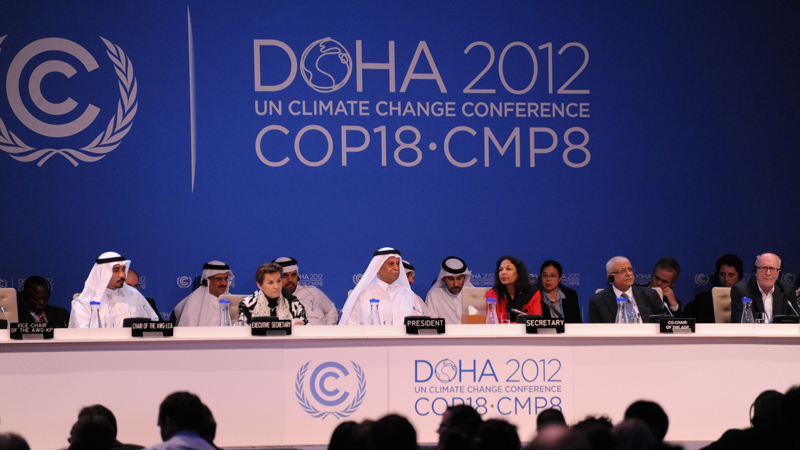 “So what BBC channel will this be appearing on?” asked Yvo de Boer, former UN climate chief.

Our interview finished, his assistant stood hovering with a clipboard. My mind raced. She had evidently told Yvo this was climate Hardtalk on the BBC. Or given my questions, Softtalk.

“Not BBC,” I replied. “It’s better – RTCC. You mean you haven’t heard of us? Yvo shook his head, and looked at his assistant, who then looked back at me, her eyes pleading with me to say I was joking and yes, this was the News at 10.

Then he got up, shook my hand and walked off. I’m pretty sure that assistant got a bollocking.

That was two weeks after we launched RTCC in November 2011, just before the UN climate summit in Durban, South Africa. Amid the maelstrom of those talks, not a lot of people knew who we were.

This week RTCC celebrates its third birthday, which the team will toast with a few pisco sours at the upcoming UN climate summit in Lima, Peru, and I thought I’d take a rare opportunity to reflect on how far we have come.

The concept for a website focusing on the politics and diplomacy of climate change was the idea of our executive director James Ramsey.

In September 2011 he left three of us – myself and colleagues Matt Wilson and Stuart McDonald – to flesh out the idea.

We knew we were entering a market already well served by the Guardian’s Sauron-esque gaze, together with the likes of Grist, Business Green, Carbon Brief and Climate Central.

But we were also confident that with the right team we could ride a wave of interest that was only going to get bigger as the dangers of climate change and opportunities from green growth become clearer.

Our aim was to create a platform that was balanced, respected the science but questioned policy, and tried at all times to present complex stories in a simple and entertaining fashion.

The first few months after our launch were fairly depressing, so much so I stopped looking at our analytics for a few weeks. There are only so many times you can look at a flat line and try and convince yourself it’s pointing up.

I like to think it was the 48-hour live-blog I ran in the closing stages of the Durban summit that really got us noticed, although by the end of that conference I think I was hallucinating through lack of sleep.

The truth is slightly more ordinary. Our web developer Thet Htoo Aung worked brutal hours to get the site up to speed.

RTCC’s first reporters John Parnell and Tierney Smith worked wonders in making contacts in the field and started to deliver a diet of global climate news that struck a chord with readers.

I’m proud of how the website has developed since then, and the stories the team has broken.

From Megan Darby’s exclusive revealing the UK’s climate diplomacy budget was slashed 39%, Sophie Yeo’s expose of a secret meeting between climate scientists and sceptics and live blogging the New York climate summit, we have it covered.

I’m also proud that in times when many say journalism as a profession is dying, we’re investing in great writers, not just in London but also in Rio, New Delhi, New York and beyond.

This has been rewarded with generous sponsors and loyal readers, at times over 100,000 in a day, a huge number for such a small website.

And no wonder. I think climate change and the UN negotiations are one of the most compelling stories on the planet.

It’s no longer (if it ever was) a scientific subject. Julia Gillard and Hilary Clinton both devoted the best part of a chapter to the insanity of climate politics in their recent biographies.

Gillard described how Australian prime minister Kevin Rudd was left “emotionally broken” after the 2009 UN climate summit in Copenhagen. Clinton offered a compelling account of stalking corridors in the Danish capital with Obama, hunting the Chinese.

This is a problem that has many leaders up at night sweating – and that’s just those in developed countries wrestling with how to curb emissions.

Heads of states in Pacific Island states face an existential threat. Will their children be the ones to watch the last boat leaving their countries for good?

This is an issue that touches politics, economics, social justice, intergenerational equity and security.

It’s also testing mankind’s willingness to work together for a common goal, and placing the effectiveness of the UN as an institution under an unforgiving glare.

Others disagree. Friends still regard me with a level of suspicion when I start talking about work – there is something about climate change than can bring a raging dinner party to a crashing silence.

I guess it’s poor form to point out the embedded emissions in the host’s beef bourguignon, or to warn their favoured holiday destination in Cornwall could be at risk from rising sea levels.

And this is an obvious challenge both for journalists and other communicators trying to explain why climate change is a threat that should be taken seriously.

It’s just so depressing. If you’re not hearing about rising seas drenching someone’s home, there’s a drought or a climate security story to follow up.

I now understand why, as a sports journalist at the BBC from 2001-2010, I succeeded in ignoring anything written or spoken about climate change.

This week, when flicking through the latest UNEP emissions gap study, and contemplating quite how screwed we could be, I wondered whether it might be easier reflecting on England’s epic 3-1 victory over the Scots on Tuesday night.

As the father of a eight-month old girl, some of these climate science studies can be fairly harrowing. By the time she’s 50 the world could either be heading for zero net carbon emissions, or 4C of warming.

As for the global talks, which we cover so closely, is there any urgency?

I’d say a mixture of yes and no. There appear to be plenty of officials happily picking up huge expenses tabs and travelling the world in business class while doing not a lot.

But there are others like Nepal’s Prakash Mathema, Pa Ousman Jarju from the Gambia or Yeb Sano from the Philippines, who take this fight personally.

I remember interviewing Sano around this time last year, on the sidelines of the Warsaw climate summit.

A Typhoon had just smashed into his country, and he wasn’t sure if his brother had survived.

He looked stunned, and spoke quietly. And the next day he reduced many to tears with an impassioned plea for more progress at the talks.

These are the ones who are part of communities living on the frontline of climate change, and they are ones – like Kathy Jetnil-Kijiner – who you will hear more from on RTCC as we build up our coverage towards Paris.

What’s different to Durban in 2011 is that there seems to be a growing constituency behind the idea of a UN climate deal, driven in no small part by a buoyant green business community.

I was struck at the New York summit by just how enthused business leaders were about this issue, not so much from any social justice perspective, but because they genuinely felt there are huge opportunities to be gained in efficiency and investing in renewables.

There was even the bizarre sight of oil and gas executives lining up to call for an end to coal investment, the start of a battle for the climate moral high ground.

I use gas (and probably coal-fired electricity) on a daily basis. It’s not for us to demonise fossil fuel companies – some do that fairly effectively by themselves.

But I’ve sensed in the three years we have been online there is a wave of optimism for a cleaner future, cities full of greener spaces but free of carcinogenic air particles.

Is that a result of fears over climate change? Probably not. Would a global climate deal spur more change? Perhaps.

What’s clear is that as the environment comes under increased pressure from humans, this is a critical decade.

Whatever side of the fence you sit on, it’s one of the biggest stories in town. You’ll find us at the centre of the action.