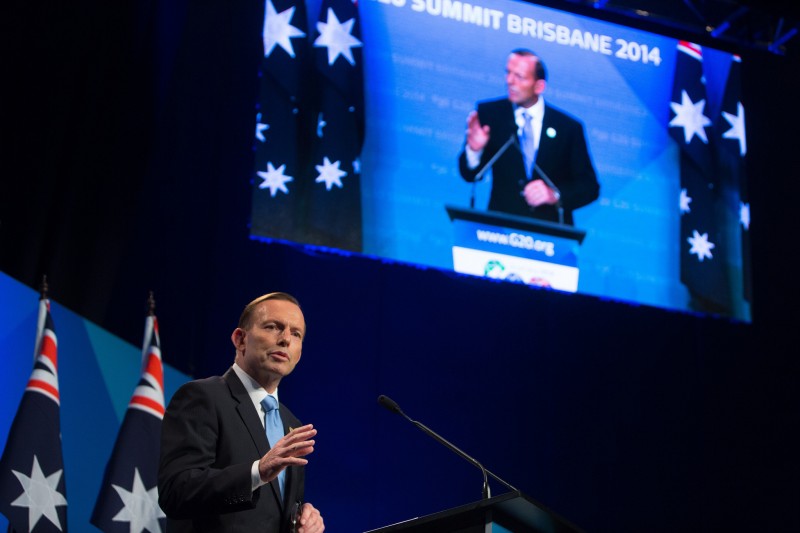 Climate change ended up as one of the headline issues of the 2014 G20 summit in Brisbane, despite efforts by the host government to block any discussion about reducing greenhouse gas emissions.

Far from silencing calls for climate action, prime minister Tony Abbott left the meeting with calls for Australia to take its fair share of carbon cuts ringing in his ears after private meetings with his US, UK and French counterparts.

“Countries that have so far done the least have to think about what more they can do. I’ve had good and friendly discussions with prime minister Abbott about that,” said UK prime minister David Cameron.

US president Barack Obama offered his thoughts in a speech to local students. “The US and Australia has a lot in common. Well, one of the things we have in common is we produce a lot of carbon … which means we’ve got to step up,” he said.

And according to reports, France’s president Francois Hollande joined Obama in making a “strong statement in support of immediate action on climate change” inside the high level talks.

In turn, Abbott was said to have urged leaders to back what he termed “clean coal” and claimed a “good economy is good for the environment.”

But despite his bullish talk post meeting, there could be no disguising the fact that he had been embarrassed by a high-level ambush from fellow leaders, many tired of what they see as Australia’s blocking tactics in the face of a global climate agreement.

“This was a PR shambles completely of the Government’s making,” said John Connor from the independent Climate Institute.

“We couldn’t have paid for or managed a better communications campaign emphasising that the rest of world leaders recognise the deep connection between climate change and economic growth.”

Speaking to reporters at the summit, one EU negotiator spoke of “trench warfare” between Australian officials and others keen to see plans for a UN-backed global warming agreement in 2015 gain momentum.

“In the end we have references to most of the things we wanted,” they added.

The final communique contained some fairly bland comments of support for “effective action” on climate change, together with a new plan for multilateral collaboration on energy efficiency.

“We will work together to adopt successfully a protocol, another legal instrument or an agreed outcome with legal force under the UNFCCC that is applicable to all parties at the 21st Conference of the Parties (COP21) in Paris in 2015,” it reads.

This diplomatic language belies the significant announcement by the US and China over emission cuts before the meeting started, and equally important commitments from Washington and Tokyo to offer $4.5 billion to the UN-backed Green Climate Fund.

The UK’s decision to add a further $1 billion to the GCF pot, bringing the bank close to its initial target $10 billion, places further pressure on Abbott to deliver something to a fund that has assumed in the space of a few days huge diplomatic importance.

The PM, who once called climate science “absolute crap”, was reportedly in the meeting between Obama and Japan’s Shinzo Abe when they agreed to release their funding plans.

He now has three days to decide if Australia will contribute at a special pledging conference that is taking place in Berlin on November 19-20, although he indicated late on Sunday no cash would be forthcoming.

“We are doing a very great deal and I suppose given what we are doing we don’t intend, at this time, to do more,” the Guardian reported him as saying.

Abbott also has a few months before the country is required to reveal what emission cuts it could contribute towards a global climate deal. Currently it has a 5% reduction target on 2005 levels by 2020,

Typically optimistic, the UN’s lead climate official Christiana Figueres spoke of her optimism post G20, but for now the noises from Canberra indicate it will not budge.

Asked if he felt global warming was a threat to economic growth treasurer Joe Hockey replied “No, I don’t. Absolutely not.”

“Barack Obama has to get any initiative on climate change through a hostile US Congress … That’s up to the US but so far he hasn’t had great success,” he said.

It was left to David Cameron, a fellow centre-right politician whom Abbott is said to admire, to outline his rationale for addressing rising global emissions.

Like Abbott, Cameron leads a party full of members sceptical of men-made climate change. But unlike Abbott, he said he takes the threat seriously.

“I always say, think about it like insurance, even if you don’t believe in the nature of this threat, isn’t it better to insure against it,” he told reporters.

“You might think there’s only a 10% chance of your house burning down, but even if it’s that percentage chance wouldn’t you do something to try and make sure you can save your world, your environment for your children and your grandchildren?”