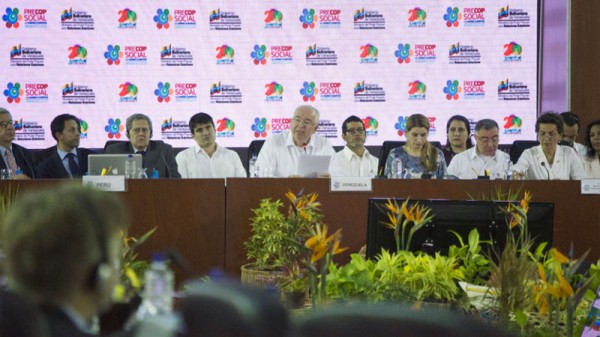 Climate change activists refused to sanction the phase out of fossil fuels at a meeting in Venezuela this week.

At a meeting hosted by the Venezuelan government, activists from Latin America clashed with international groups over demands that 80% of oil, coal and gas should be left in the ground.

The bid for the ultimate phase out of fossil fuels is in line with the latest science on climate change from the IPCC, released last Sunday. That said carbon dioxide emissions must be reduced to zero by the end of the century to limit temperature rise to 2C.

An early text, produced by civil society organisations in July, demanded the rapid reduction of fossil fuels and for the destruction of the “capitalist hegemonic system”.

But references to both fossil fuels and capitalism were dropped from the final text prepared this week – a document which is supposed to represent civil society’s views on the UN’s intended climate change deal.

The meeting, called the social pre-COP, is hosted by the Venezuelan government in what they say is an attempt to include civil society in the UN’s climate negotiations.

Around 80 green groups attended the event at the invitation of the government, including WWF, Greenpeace and Friends of the Earth.

It is supported by, but not officially affiliated to, the UN. The final two days were attended by ministers and diplomats from 45 countries, with UN climate chief Christiana Figueres delivering a keynote speech.

The pre-conference talks provide an opportunity every year for diplomats to exchange ideas every year before the UN’s official climate meeting. This is the first time that civil society has been given a prominent role in the process.

A meeting in Lima next month is the last opportunity for politicians to debate the UN’s new climate deal before it must be signed in Paris next year.

But the talks this week turned sour, with ideological differences and national interests blocking consensus on several “red line” issues, including the phase out of fossil fuels, the independence of social movements and taking on transnational corporations in all countries.

Instead, the document asserted only that “private transnational corporations in developed countries must be held accountable for their actions and practices in the world”.

Participants raised concerns that the overtly anti-capitalist Venezuelan government had influenced the proceedings.

“Yesterday, I said that I did not believe that Venezuela was hijacking the Social PreCOP process for its own political ends. But I do have questions, and they’re growing by the hour,” said one participant, David Tong, in a blog post.

The government – with the backing of many local groups – is unwilling to turn its back on its vast oil industry, which contributes around 25% of the country’s GDP. It cites development needs within the country.

Ministers assert that capitalism is the root cause of the problem and that the global north must bear most of the responsibility for reducing emissions.

“The #PreCOPSocial plenary now seems to have turned into a book launch session for Chavez’s testament. Do we get given free copies later?” tweeted Rachel Dobric, director of the Aotearoa Youth Leadership Institute in New Zealand, referring Venezuela’s staunchly socialist former leader.

But a late night compromise saw international charities abandon demands for a fossil fuel phase-out in exchange for the removal of anti-capitalist references, which many were uncomfortable with.

The trade-off strikes at the heart of what many green groups see as their raison d’etre: creating a world where clean, renewable energy replaces a system currently dependant on burning fossil fuels that are hazardous to the climate, human health and the economy.

Dissatisfied participants questioned why the meeting was being chaired by Claudia Salerno, Venezuela’s top climate negotiator, rather than a representative from civil society.

And there were concerns that the final text, which was drafted by Salerno and the Venezuelan presidency, presented itself as a “consensus” among civil society on issues where there had been no agreement in the meeting.

When challenged by one participant for Venezuela’s role in the process in the early hours of the negotiations, Salerno walked out and did not return – an exit which one delegate described to RTCC as “bizarre”.

Meanwhile, Venezuelan NGOs that disagree with the country’s stance on climate change boycotted the meeting.

They hosted an alternative dialogue on 5 November, where they discussed “critical issues” that they say were excluded from the official agenda.

They are particularly critical of Venezuela’s decision to abolish its environment ministry, which it merged with its housing industry in September.

They also questioned the ideological basis of the discussions.

“We believe that a discussion that reduces issues related to global climate change to a mere comparison of socialism versus capitalism, simplifies the complex social and political situation related to climate change,” said the network, called RED ARA, in a statement.

Mauro Fernandez from Greenpeace Venezuela, who attended the meeting, tweeted ahead of the meeting that he hoped it would “enable Venezuela to launch an open discussion about its 90% fossil dependence”.

The impact and reception of the document will be tested in Lima this December.

Here, civil society will be competing for attention with businesses and other pressure groups for the attention of the world’s governments as they work towards the UN’s new climate deal.