Water shortages, deforestation and indigenous rights are some of the issues facing Brazil’s president in the next four years 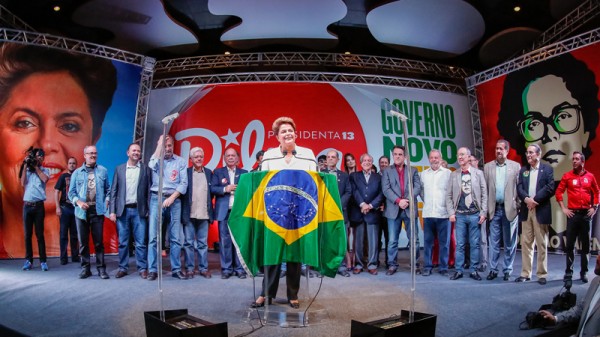 Brazil’s first female president, Dilma Rousseff, was reelected last week by 51.6% of the vote to 48.4% for rival Aecio Neves.

Brazil has achieved international recognition for social welfare reforms that lifted 36 million people out of poverty, according to recent report from the Food and Agriculture Organization. But it is far from being an environmentally friendly country.

“Brazil has a distorted view that environment is an obstacle to development as if natural resources were infinite just because the country has 15% of the whole planet’s freshwater, one of the largest forest cover and around one third of the globe’s biodiversity. It gives an impression that it is infinite,” Carlos Rittl, executive secretary from the Climate Observatory, told RTCC .

With the help of an expert on climate change and sustainable development, RTCC looks at the five main environmental challenges Rousseff faces in the next four years.

Brazil enacted a national policy to combat climate change in 2009, but it has yet to show significant results.

NGOs and environmentalists say the policy is superficial and does not fully address the country’s needs. It lacks concrete proposals and long term mechanisms to cut greenhouse gas emissions.

The country is preparing a national plan for adaptation, to cope with the impact of global warming, to be finished in 2015.

“We need to project risks generated by climate change into national policies and large infrastructure projects. We also should bring our responsibilities and opportunities offered by climate change as an issue that affects directly the economy and human lives with social and environmental costs”, said Rittl.

Renewable sources like wind, solar and biofuels are still marginal. Apart from enhancing hydro power, the country has been dropping investments in this sector.

Brazil gets 46% of its energy and 89% of its electricity from renewables, of which the bulk comes from large-scale hydro power.

But in its ten-year national plan, the Ministry of Mines and Energy and state-run company of energy research (EPE) expects more than 70% of energy investments to go into fossil fuels.

Between 2008 and 2013, Brazil’s investment in renewables fell from US$12 billion to $3bn, according to Frankfurt School of Finance & Management and the United Nations Environment Programme (UNEP) in the “Global Trends in Renewable Energy Investment 2014”.

In 2013, it was lagging behind South Africa on $5bn and India on $6bn. China, with investment of $56bn, spent more than the European Union for the first time.

In solar power, for example, Brazil is expecting to install 2 gigawatts in ten years. China is rolling out the same amount of capacity every two months. 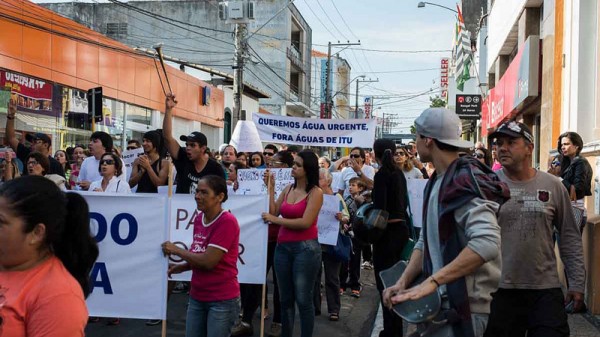 A study conducted by Brazil’s national water agency (ANA) found that over 3,000 towns and cities across the country are in danger of water shortages next year. That corresponds to 55% of the country’s municipalities.

Water shortages are a regular aspect of life in the largest Latin American country. And climate change is making severe drought increasingly likely, which results in lower water levels in reservoirs.

The 12 million inhabitants of São Paulo deal with water rationing on a daily basis and are being asked to cut water consumption by 20 percent.

Since July 2014, the water that has reached the taps of at least 9 million residents of São Paulo comes from the “dead volume” (only used in emergencies) of the Cantareira system of dams built in the 1970s.

And 1 in 5 Brazilian cities affected by water shortages have declared a public calamity or emergency, said Rittl.

He argued Brazil should charge for water consumption by industries and agribusiness, as well as urban condominiums and shopping centers, to promote better efficiency. 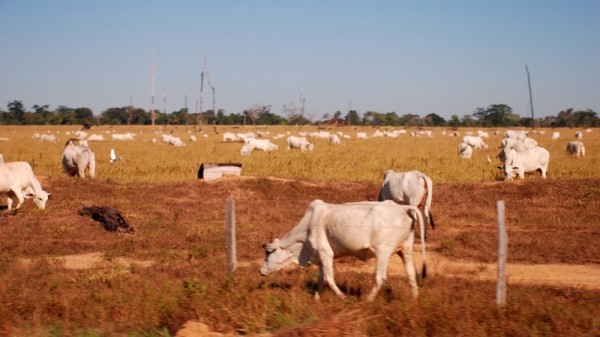 The majority of rainforest clearance is to make way for cattle ranching
(Pic: Flickr/Joelle Hernandez)

Over the last four decades, some 42 billion trees have been destroyed in the Brazilian Amazon, or 2,000 a second.

The main driver is agriculture, with more than 80% of forest cleared for cattle pasture, according to WWF. Alone, the deforestation caused by cattle ranching is responsible for the release of 340 million tons of carbon to the atmosphere every year, equivalent to 3.4% of current global emissions.

Forests should be seen as an ally for food production, as agribusiness uses between 60 and 70% of the whole water consumption in Brazil for irrigation and most of this water comes from river basins.

The agriculture sector depends on the environmental services provided by forests. Although this codependency is inevitable, deforestation patterns are still growing.

Under the UN’s main initiative for protecting forests, REDD+ (reducing emissions from deforestation and forest degradation), communities can be paid for environmental services.

But Brazil has no national strategy for REDD+ and a draft to turn it into a public policy has been stuck in the National Congress for over five years.

Deforestation does not only contribute to climate change, it affects the weather regionally.

A study launched on 30 October shows that the role of the Amazon rainforest in regulating weather and rain patterns is far beyond expected, affecting life in megalopolis like São Paulo, more than 2,000 km away from the forest.

In it, the Brazilian researcher Antonio Donato Nobre from the National Institute for Space Research (INPE) highlights that more than 20 billion tonnes of water are released by the trees through transpiration every day. That is more than the Amazon River pours into the Atlantic ocean, around 17 billion tons a day.

During her first term, Dilma Rousseff was known as the president who created the least conservation units and indigenous lands since the military regime (1964-1985).

Brazil’s Indigenous Territories (ITs) play a significant role in keeping CO2 emissions from the atmosphere. They are expected to help prevent 27.2 million hectares of deforestation by 2050, avoiding 12 billion tons of carbon dioxide emissions.

From 1980 to 2007, some 300 ITs were legally recognised. They represent 12.5% of national territory and more than half a million indigenous people.

Rousseff has only announced the creation of protected areas this year during elections, when seven conservation units were created.

International groups have raised concerns about violation of indigenous rights when it comes to pushing through major infrastructure projects such as hydropower dams.

In March, a group of NGOs questioned the Brazilian State in the Inter-American Commission on Human Rights of the Organization of American States in Washington about the use of an act dating from the military dictatorship that has been used against the indigenous population.