A fight between rival academics over climate change and conflict has important messages for peacekeepers, says Alex Randall 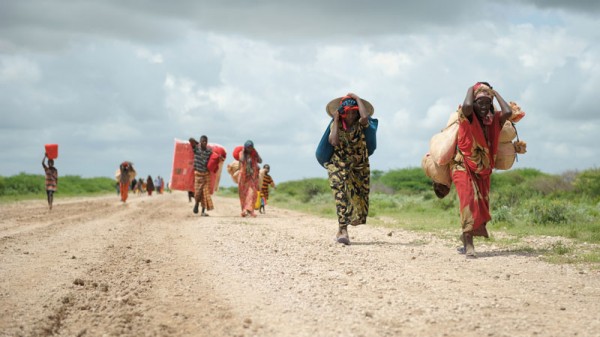 This week a fight has broken out between rival academics about the relationship between climate change and conflict.

The disagreement is about how powerful the climate-conflict link is.

On one side we have Burke and Hsiang.

They have produced several meta-studies on the connection between climate and conflict. Each of these studies shows a significant and powerful relationship between altered weather patterns and conflict. The most recent – a working paper published in October – combines data from 55 different peer reviewed papers.

On the other side we have a group of 26 researchers who think the connection is not as powerful and Burke and Hsiang make out.

They argue that Burke and Hsiang have not analysed the data correctly, and have omitted several studies that have skewed their results. They argue that this explains why their conclusions differ from the rest of the academic community, and from the conclusions of the IPCC.

The most recent Burke and Hsiang study uses a very broad definition of conflict.

18 of the 55 papers are from studies of “interpersonal conflict” – what most people would call crime.

The others look at what is perhaps a more commonly held understanding of conflict. Larger, organised groups of people fighting each other with weapons – with political, strategic or economic motivations.

This is one of the key criticisms made of Burke and Hsiang’s studies. Crimes such as burglary and assault are fundamentally different phenomena to organised armed violence. It not clear that we can say much about the relationship between climate change and civil war, using research on climate change and “interpersonal” crimes.

In the crime studies researchers have looked for correlations between weather and levels of assaults, murders, robberies and other crimes. In many of the studies, researchers found that abnormal weather leads to a reduction in some crime.

However, the meta-study finds that across all the studies, altered weather patterns tend to increase rather than decrease crime levels.

In these studies researchers suggest two mechanisms connecting weather and crime. The first is psychological. During abnormally hot weather people are more likely to respond violently.

The second mechanism is economic. In many places altered weather leads to increased poverty. This is especially the case where a large part of the population are directly dependent on agriculture for their income. Poverty forces some people into crime in order to maintain their income.

One study from the Philippines found that immediately after a typhoon strike, crime falls.

The aftermath of the disaster and the desire to help each other leads to a rise in “pro social behaviour” (being nice) and a drop in crime. However, in the year following the typhoon, crime increases as the destruction leaves people in greater poverty.

Regardless of what these studies tell us about climate change and conflict, they can tell us something about preventing crime.

Poverty created by disasters and altered weather could force people into crime. In the face of changing weather, keeping people out of poverty becomes incredibly important. Regardless of how strong the climate-crime connection is, this points to the need for strong welfare and social security systems.

The other studies in Burke and Hsiang’s meta-study look at what is perhaps a more commonly held understanding of conflict.

They claim these studies collectively point to a powerful connection between abnormal weather and conflict.

The kinds of conflict the studies look at are important. Many of them look at “civil conflict” and “intergroup violence”. The authors claim that the combined weight of these studies points to strong relationship between changes in the climate and violent conflict.

The rival academics also claim one of Burke and Hsiang’s previous studies overlooked a number of papers on climate and conflict. The overlooked studies did not find such a strong relationship.

When these studies are added to the mix, the effect becomes weaker. The critics state they are not arguing that climate change never affects conflict, but rather that is is highly dependent on the kind of climactic change, the kind of conflict and the geographic location.

So can we draw anything useful from this academic dispute?

None of the studies cited by either side point to any increase in interstate warfare. Both sides seem to agree changes in the climate are not having a measurable impact on whether governments take their countries to war with other countries.

Both sides agree that conflicts have key drivers that are not climate related. Climate change then makes the conflicts more likely, but is not their primary cause. (But they disagree on how much more likely.)

No studies cited by either side are suggesting that climate change will lead to a fundamentally new kind of warfare. So there is every reason to believe that future conflicts, even in a warmer world, can be prevented.

Although there are significant disagreements about how to prevent conflicts, some things are clear.

Strong, democratic institutions are important. Countries without these are more vulnerable to civil conflict. Peace building after conflicts is vital to prevent countries returning to violence. Countries with high levels of absolute poverty and vast disparities in wealth and more susceptible to conflict.

To the extent that peacebuilding strategies work at present, we can be hopeful that they will continue to work in the future.

The fact that there is some relationship between climate and conflict strengthens the case for both investment in peace building, and preventing climate change.

Alex Randall works on climate policy at the UK Climate Change and Migration Coalition, a project run by the Climate Outreach and Information Network