Carbon capture technology could take off this decade – report 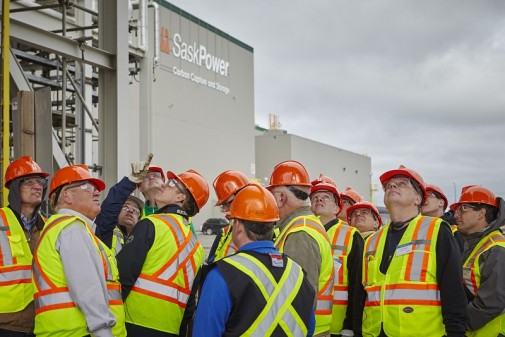 The development of technology allowing power plants to burn fossil fuels without spewing greenhouse gases into the atmosphere is accelerating, a report has found.

There has been a 50% increase in the construction and operation of carbon capture and storage (CCS) facilities since 2011, says the Global CCS Institute in its annual review of the sector.

In addition to the 13 plants operating in the US, Canada, Europe and Latin America, it says a further eight are “anticipated to go live” by 2016.

Brad Page, head of the Global CCS Institute, said capturing CO2 at source and storing it underground could be a game-changer in efforts to slow CO2 emissions.

“We simply can’t have an effective response to tackling climate change without CCS,” he said.

The recent retrofit of a Canadian power plant cost $1.35m, and will prevent the release of one million tonnes of CO2 a year.

Supporters of the technology such as Shell say it will allow existing reserves of oil, gas and coal to be burnt without impacting on the world’s climate.

Last week the Intergovernmental Panel on Climate Change, the world’s leading authority on global warming, said burning fossil fuels had been responsible for a 78% increase in carbon emissions since 1970.

It said the countries had already released around two-thirds of the amount of CO2 required to guarantee warming above 2C, a level governments agreed to avoid in 2010 and deemed dangerous by scientists.

“To keep a good chance of staying below 2C, and at manageable costs, our emissions should drop by 40 to 70% globally between 2010 and 2050, falling to zero or below by 2100,” said IPCC chair Dr Rajendra Pachauri.

The next two large-scale CCS facilities expected to come online are in Mississippi and Texas, with opening dates pencilled in for 2016.

According to the report, China has 12 projects in the pipeline, the US nine and Europe six.

Despite the potential of CCS to radically cut carbon, many climate campaigners remain unconvinced by the technology, accusing fossil fuel companies of using it as a front to maintain their hegemony over energy supplies.

In a speech at Chatham House on Tuesday, veteran climate activist Bill McKibben said it was an “excuse for inaction”.

Citing Shell, the backer of a planned CCS facility in Peterhead, Scotland, McKibben said it along with fellow oil producers were “no longer normal companies operating by the normal rules”.

“If they follow their business plans then the planet tanks. That makes them very different to other kinds of corporations,” he said.