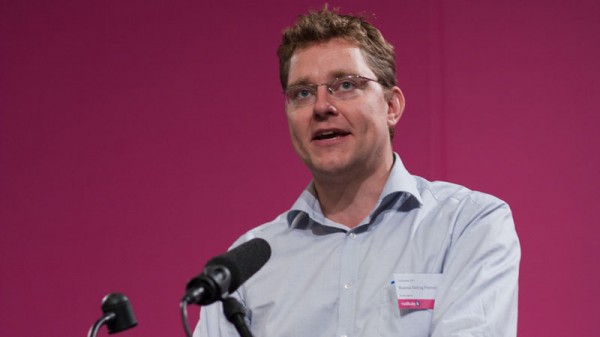 The UN’s forthcoming climate report will take the doubt out of climate politics, says Denmark’s minister of climate and energy.

Rasmus Helveg-Petersen said the IPCC synthesis report, which is being finalised in Copenhagen this week, would build a strong scientific basis for future political decisions.

“It eliminates the option of people inventing their own numbers,” he told RTCC. “First we have to agree on the facts, then we can decide the course of action.”

Government officials are in Denmark to hammer out the report’s final shape, seeking to extract policy-relevant messages from around 5,000 pages of science.

It is the culmination of six years of work by the Intergovernmental Panel on Climate Change. The 100-page document will bring together five reports, put together by 830 scientists, based on the findings of over 30,000 scientific papers.

But this is the one that ministers will read, said Helveg-Petersen.

“The synthesis report will form the real basis on which we form our political decisions and I think it will be important in the international climate negotiations in the coming year.”

During a week of closed-door negotiations, officials scrutinise the report line-by-line. “Most of them are discussed, even if they remain unchanged,” said Christiane Textor from the German government delegation.

The report, which is due to be published on 2 November, arrives at a critical time for international climate talks. Climate diplomats meet in Lima this December to lay the groundwork for a global deal in Paris next year.

The setting of this week’s scientific meeting gave a bitter reminder of how difficult this task can be – Copenhagen provided the backdrop to the UN’s last disastrous attempt to sign off a climate deal in 2009.

It is the process of approval by governments that makes the IPCC so relevant in policymaking circles, added Textor. It means that each nation, whatever their political differences, works on the basis of the same facts. “That makes a big difference,” she said.

Broadly, it also gives them the same aims – the IPCC lays out the mitigation and adaptation opportunities available and sets out the consequences of shunning them.

At its heart, the IPCC is a scientific report, and the level of governmental involvement has been treated with suspicion from some quarters.

But the role of governments is not to revise the scientific content and no one is negotiating, stressed Textor. Their purpose is instead to tease out the messages that are most relevant in policy circles.

“We come from different backgrounds, but we are not having political discussions here. The authors present their text, and governments ask the authors why is this presented this way, and then the authors answer to governments why they have presented text in a certain way, or they modify it,” she says.

“It always has to be consistent with the science and the underlying report.”

While there are various priorities at play in the room, participants report a friendlier atmosphere than at the notoriously prickly political negotiations, which are plagued by hostility and seemingly irreconcilable ideological rifts.

“There’s not even a security check to enter the building,” said a surprised Mattias Söderberg, a climate change advisor at ACT Alliance.

“It’s much more constructive and friendly, but of course still different opinions. Country governments don’t have the same position, so that’s reflected.”

This may be because the contents of the report, unlike the UN’s political deal, do not directly impact on country’s energy industries or require rich countries to transfer large amount of money to the poor.

Political agreement does not automatically follow agreement on the climate science. Parties to the UN talks regularly refer to their positions as being in line with the science, even as they disagree with each other.

They no longer debate the effect of the emissions on the atmosphere, but how much each individual country should be allowed to emit.

But a strong scientific report gives each country a strong basis on which to pin their argument, however diverse these may be.

Textor added: “We have a common interest to have a good scientific report which we can all trust and believe in.”