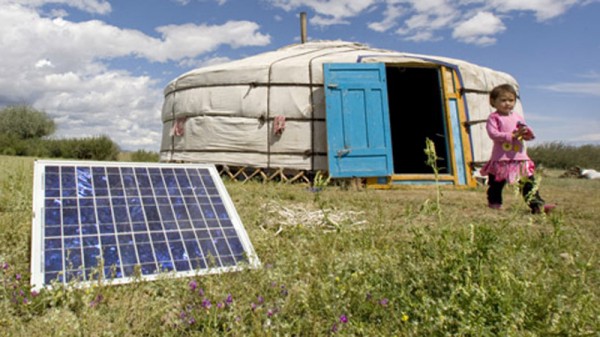 China, India and other emerging economies could see their levels of clean energy installations overtake rich countries in 2014.

This represents a leap more than the total capacity of France, and a growth rate of 143%. In contrast, richer OECD nations added 213GW.

“Clean energy technologies are no longer out of reach for developing countries,” says the study, which was backed by the US and UK governments.

In 2013 developing countries added 37.3GW, just behind OECD on 43.3GW. That gap could disappear later this year says BNEF, largely due to China’s record-breaking levels of solar installations.

It finds that smaller wind and solar plants make more economic sense for countries without far-reaching electricity grids, and are cheaper than paying for diesel.

“Utility-scale photovoltaic solar projects can be constructed in as few as six months and distributed photovoltaic systems can be added to rooftops in a day or less,” it adds.

It reveals Asia as the world’s emerging clean energy manufacturing hub, with China’s growth complemented by investments in Pakistan and Vietnam.

In Latin America Peru, Costa Rica, Colombia, and Nicaragua are all scaling up renewables – buoyed the report says by policy reforms and a surge in outside investment.

“In percentage terms, capacity growth in smaller Nicaragua (44.7%) was about comparable to China as the Central American nation added 399MW since 2008 and grew its capacity to 1.3GW,” it says.

In Africa, BNEF highlights Uganda’s focus on off-grid energy services as a potential template for others in the region to follow.

But it warns the gap between total installed clean energy in OECD countries and emerging markets is still large, at 467GW compared to 241GW.

And in their drive to expand access to energy, developing countries are installing conventional power plants as well as clean sources.

“Renewables represented just over a quarter of all new installations in Climatescope countries from 2008-2013,” the report finds.

“By comparison, they accounted for over 80% of new capacity added in the OECD.”