Giant tower to monitor climate change in the Amazon

Taller than the Eiffel Tower, the observatory will capture vital data on how climate change is impacting the rainforest 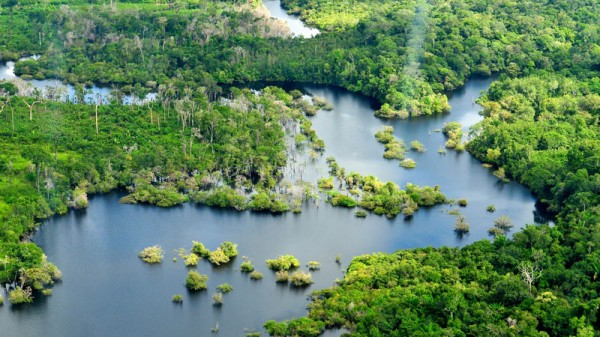 In the Amazon, everything is big – the trees, the rivers, the snakes, and the statistics that measure everything in numbers of football fields or areas the size of entire countries.

Now one of the biggest towers in the world – taller than the Eiffel Tower in Paris and the Chrysler Building in Chicago − is about to rise above the rainforest.

The purpose of the 325-metre (1,066 feet) Amazon Tall Tower Observatory (ATTO) is to gather vital information on how climate change is affecting the Amazon ecosystem and other humid tropical areas, using climate models.

The research project is being run by Brazil’s National Institute for Amazonia Research (INPA), and the Max Planck Institute for Chemistry, Germany. As one of the project directors, Paulo Ataxo, of the University of São Paulo, explains: “The tower will help us answer innumerable questions related to global climate change.”

Jointly financed by the Brazilian and German governments, the ATTO – which has taken seven years to plan and build − is located 100 miles from the city of Manaus. The steel girders had to be transported 4,000 km by road and river from the factory in southern Brazil, and finally up a dirt track into the heart of the forest.

The ATTO, adding to a network of smaller observation towers already in the area, will be able to monitor − without direct human influence − changes in air masses over an area of hundreds of miles.

It is expected to be in operation for at least 20 years, measuring the wind, humidity, carbon absorption, cloud formation and meteorological patterns in the soil, tree tops, and the air above, adding to the growing body of research showing how vital it is to stop deforestation.

Philip Fearnside, INPA research professor who has been studying the rainforest for over 40 years, says that the loss of natural tree cover is influencing the delicate environmental equilibrium of the region, and of the rest of the country. He says: “Among other services, the forest recycles water, which is critical for the rains in São Paulo, stores carbon, avoiding the worsening of global warming, and maintains biodiversity.”

A recent study by Brazilian, Canadian and German scientists from São Paulo Universities UNESP and USP, Toronto University, and the Hemholtz Centre for Environmental Research in Germany concluded that the deforestation of tropical forests emits at least 20% more CO2 than previously thought.

The study, published in the Nature Communications magazine, used remote sensoring, the ecology of the countryside, and modelling of the forest dynamic to develop a new approach that included the previously uncalculated loss of biomass on the edges of forest fragments.

The Brazilian government claims it is reducing deforestation. But, according to Environment Ministry figures, the vast area known as Amazônia Legal, which covers the whole of the Amazon basin, has already lost almost a fifth (18.2%) of its total area of 5 million sq km  − that is, around 900,000 sq km.

Another recent study −  a three-year Amazalert research project begun in 2011 by 14 European and South American institutes, including the Universities of Leeds and Edinburgh and the UK Met Office − has concluded that if present policies continue, the future will be chaotic.

Amazalert project looked at the impacts of deforestation and climate change on the Amazon up to 2050.

While there is a constant stream of research on the climate and vegetation of the rainforest, to which ATTO will be contributing, there is much less research and information about the role of human beings and society in the Amazon.

Amazalert found that violence and unplanned growth in the towns on the edges of the Amazon region are also threatening its integrity.

Among Brazil’s 50 towns and cities with the highest murder rates per 100,000 inhabitants, 12 are located in the so-called Arc of Deforestation, which runs around the southern and eastern borders of the rainforest. The report says that violence in these towns has reached the “level of civil war”.

For Amazalert collaborator Andrea Coelho, researcher at the Institute for the Economic, Social and Environmental Development of Pará state (IDESP), the problem is that large-scale mining projects, the paving of roads, and the construction of hydroelectric dams attract lots of people, for whom there is no infrastructure.

When the projects are finished, the workers stay on and become goldminers, extractivists, or land-grabbers. Many are living in miserable conditions, and so criminality erupts.

The huge Belo Monte dam, being built on the Xingu river, is an example. In 2007, there were four cases of drug trafficking in surrounding areas. Last year, there were 238.