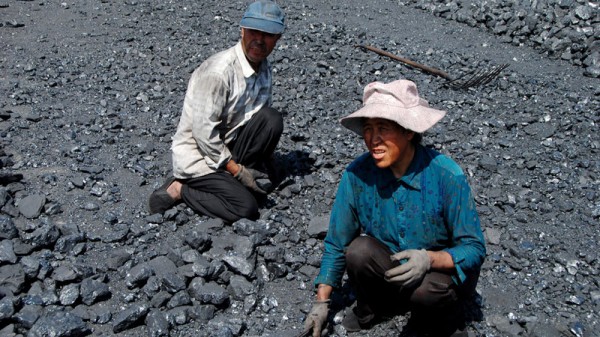 China’s coal use has fallen for the first time this century – a turning point for a country which currently consumes almost half of the world’s coal supplies.

Consumption dropped by 1-2% this year, even as the economy grew by 7.4%, coal analysts at Greenpeace revealed, using official data on China’s imports, production and stockpiles of coal.

In contrast, China’s coal consumption more than doubled during the first decade of this century. It has has slowed in recent years; coal imports dropped to just 0.9% during the first half of 2014, compared to 13.3% a year earlier.

Lauri Myllyvirta, a senior coal campaigner at Greenpeace, said it was too early to say that China’s coal use had peaked, but that the 2014 figures showed an important breakthrough in China’s attempts to decouple coal use from economic growth.

“We’re seeing a structural change where the growth in the economy is not driven by heavy industry anymore,” he told RTCC.

China’s appetite for coal means its emissions have rocketed in recent decades, which has proved one of the main obstacles in tackling climate change. CO2 emissions per person are now greater than in the EU.

When China will manage to peak its total emissions have been a subject of much discussion and speculation as the world works towards a new UN deal on climate change.

At the UN climate summit in September, Chinese vice premier Zhang Gaoli said that the superpower would aim to achieve this “as soon as possible”.

The country is currently preparing its 13th five-year plan – a document that will have a knock-on effect globally, as it will determine China’s economic planning, as well as setting targets for energy and climate, between 2016 and 2020.

An absolute peak in coal could fall in this period, said Myllyvirta, adding that it could still fluctuate around its current drop for the next couple of years.

“The really crucial thing is if China’s coal consumption had gone on going the way it has in the last ten years, there would have been no chance of peaking global CO2,” he said.

“Whether China’s coal consumption drops slightly or grows slightly, that opens up the window to peak global CO2, which is the most urgent thing for combatting climate change.”