Scientists say sea level unlikely to rise beyond 1.8m by end of century – a rise still disastrous for tropical fishermen 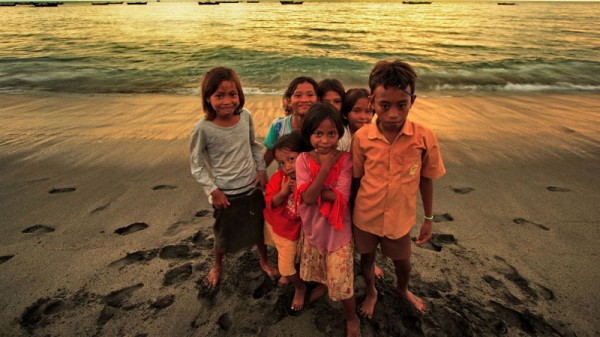 Children from a fishing village in Indonesia (Pic: Fadil Basymeleh/Flickr)

For those who think climate change means deep trouble, some comfort: there is a limit to how deep.

Danish-led researchers have looked at all the projections and satisfied themselves that, at the very worst, sea levels this century will rise by a maximum 1.8 metres − roughly the height of an average man.

They report in Environmental Research Letters that they contemplated rates of melting in Greenland and Antarctica, the retreat of mountain glaciers worldwide, and the impact of groundwater extraction for agriculture and industry.

They also looked at all the projections for thermal expansion of the oceans, because warmer water is less dense than colder water and therefore occupies a greater volume. Then they began to calculate the band of possibilities.

“We have created a picture of probable limits for how much global sea levels will rise this century,” said Aslak Grinsted, assistant professor in the Niels Bohr Institute’s Centre for Ice and Climate at the University of Copenhagen.

“Our calculations show that seas will likely rise by around 80cm. An increase of more than 180 cm has a likelihood of less than 5%. We find that a rise in sea levels of more than 2 metres is improbable.”

The worst-case scenario, he says, is something that it would be wise to consider for critical infrastructure, such as the Delta Works, a series of construction projects that protect a large area of land in the south-west of the Netherlands, or the Thames Barrier, which aims to prevent London from being inundated by exceptionally high tides and storm surges from the North Sea.

The finding comes with two important provisos: one is that any significant rise remains extremely bad news for people in those regions of the planet that are already more or less at sea level − among them the coral atolls of the tropical oceans, the Netherlands, the Nile Delta, Bangladesh, Venice in Italy, and some of the world’s great maritime cities.

The other is that the man-high limit extends only to 2100, and researchers have repeatedly warned that, once begun, sea level rise will continue for centuries.

The Danish calculations fall into the category of things that could happen: melting in polar waters inevitably means even warmer equatorial waters, and another ominous projection for the near future is that commercially valuable fish could desert the tropics by 2050.

William Cheung, head of the Changing Ocean Research Unit at the University of British Columbia, Canada, and Miranda Jones, an environmental scientist at the same university, considered what would happen if the world warmed by 3C by 2100.

They report in ICES Journal of Marine Science that, under such a scenario, tropical fish could move away from their present habitats at a rate of 26 kilometres a decade. Even with a 1C warming, they would desert their home waters at 15 km a decade.

Altogether, the two scientists considered the possibilities for 802 commercially important species, concluding that such a set of migrations might introduce new potential catches in Arctic waters, but could be very bad news for tropical fishermen, and for the hundreds of millions who depend on fish as a source of protein.

“The tropics will be the overall losers,” Dr Cheung said. “This area has a high dependence on fish for food, diet and nutrition. We’ll see a loss of fish populations that are important to the fisheries and communities in these regions.”

Paradoxically, as researchers consistently forecast accelerated rates of melting in polar waters, the Antarctic sea ice in September occupied a greater area than ever before, with the five-day average on September 19 reaching 20 million sq km, according to the US National Snow and Ice Data Centre.

That means that while most of the planet continued to warm, the Antarctic continent and the seas around it were icier, for one season at least.

Such measurements ultimately depend on satellite and aerial surveillance, and according to Claire Parkinson, climate change senior scientist at  the NASA Goddard Space Flight Centre, the anomaly simply reflects the complexity of climate dynamics and the diversity of the Earth’s environments.

“The planet as a whole is doing what was expected in terms of warming,” she says. “Sea ice as a whole is decreasing as expected, but just like with global warming, not every location with sea ice will have a downward trend in ice extent.”

But, overall, the planet is still saying goodbye to ice. The Antarctic’s gain is roughly a third in area of the loss of ice in the Arctic.