New report ranks countries’ green performance, next to how well they’re perceived to be performing 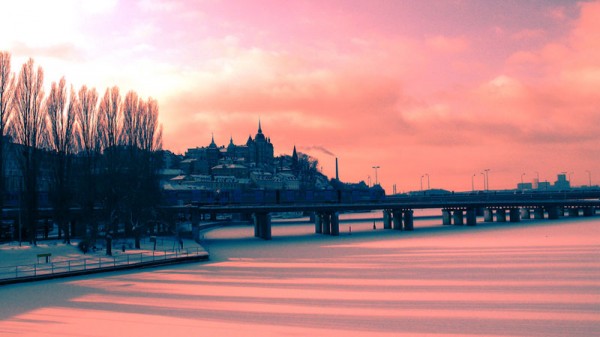 Sweden is the world’s greenest country – but Germany is taking the credit.

Iceland, Austria and Spain are greener than you think they are. Mongolia is not very green at all. Meanwhile, the US, Australia and Japan have received too much credit for too little action.

These are some of the findings from a new report from Dual Citizen, a US-based data consultancy. They have created a Global Green Economy Index, ranking countries on both how green they are perceived to be, and how well they perform in reality.

The index ranks countries based on a variety of factors, including climate leadership, efficiency, markets and investment, and the quality of their natural environment. This is the 4th edition of the report.

“Leaderships need to understand how they’re perceived by their populations to ensure they’re held accountable for their efforts or lack thereof around climate change,” said Jeremy Tamanini, who leads the consultancy.

He added that the rankings were particularly useful for countries with flourishing green markets of which investors were unaware. “If the perceptions are low but their performance is strong, they can employ better communication to bridge those gaps.”

Germany is perceived as the world’s greenest country, according to the index, although Sweden takes the crown for actual performance.

Of the 60 nations assessed, the US ranked as the 28th greenest country, falling behind its perception ranking at number 6. Australia faced a similar predicament, perceived as the 11th greenest country, but falling to a dismal 37 on performance, and down again to last place on rankings for climate change leadership.

Meanwhile, Costa Rica emerged as an unsung hero, coming in third place for performance, while only perceived as the 14th greenest country.

Hosting an international climate change conference does little to bolster a country’s reputation, it turns out, with COP19 host Poland perceived as 42nd greenest country out of the 60 assessed – although this is slightly stronger than its actual performance, which came in at 56, better only than Senegal, Qatar, Vietnam and Mongolia.

The index also ranked specific sectors. The US, for instance, redeemed itself slightly with its sustainable buildings, where it came out in top place, just above Finland and the United Arab Emirates.

Meanwhile, Denmark ranked top of the list for green markets and investments, one above Germany, perhaps justifying the perception of Copenhagen as the world’s greenest city.

There were some surprises, indicating that a green economy is not contingent on a big GDP. Zambia, for instance, ranked as the 7th best country for efficiency, while Rwanda was number one for facilitating green investments. 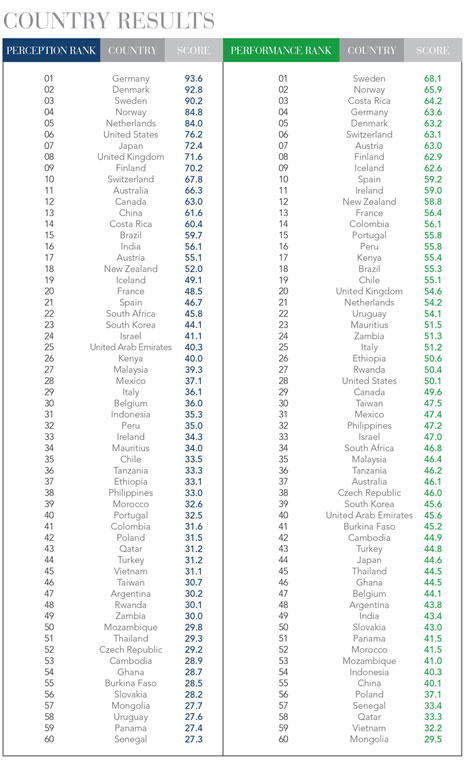 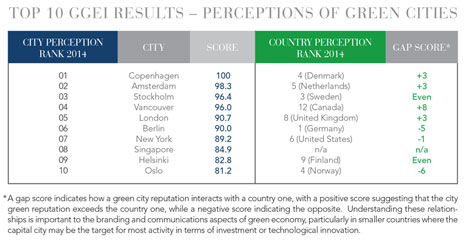