As Brazil’s government goes cool on forest protection, an indigenous leader speaks up for his people’s role 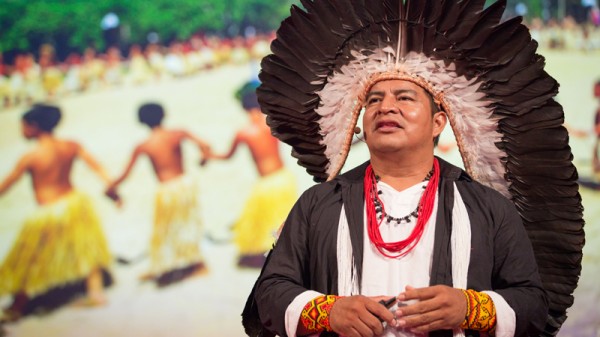 Tashka Yawanawa was born and grew up by the Gregorio river in the Brazilian state of Acre, in the heart of the Amazon. He belongs to the Yawanawa indigenous people, located near the border of Peru and Bolivia.

He learned how to speak Portuguese and live like a “white person” in the urban centres. After studying in Rio de Janeiro he went for a five years experience in the United States and got in contact with environmentalists and indigenous alliances worldwide.

At the age of 25, he went back to his tribe in Acre and became the youngest chief in the Yawanawa history. The son of a former leader, Tashka took to himself the mission to revitalize Yawanawa traditional culture but not only that, he put into practice what he had learned in the past years about sustainable development so as to help his people build and change their own future.

Tashka is now 41 and a polyglot – apart from his indigenous mother tongue, he speaks fluent Portuguese, Spanish and English. He is often seen on the stages of international conferences and as an important speaker at the United Nations biodiversity meetings.

Last week he was in Rio de Janeiro at one of the largest conferences in the world, TEDGlobal 2014. He was the only indigenous speaker at the conference, for which the slogan was “Ideas Worth Spreading”.

“I’ve participated in many conferences around the world related to indigenous, environmental and climate change issues. I had no idea that TED was so huge and had such a repercussion. It helped me to give visibility to the struggle of indigenous people to an audience of environmentalists and business people”, said Tashka.

After a week full of meetings in Rio de Janeiro, Tashka Yawanawa tells RTCC what he wants for the future of his people, and the important role indigenous play in preserving the forest and helping the climate. He is critical of the Brazilian government’s decision not to sign the New York Declaration on Forests during the climate summit hosted by Ban Ki-moon last month.

“Every human being has the responsibility of taking care of the planet. We all live in a global village,” he says. But the indigenous people who depend on natural resources to their survival are more vulnerable to the effects of climate changes.

“The forest for the Yawanawa people is a source of life, it is a place where our ancestors rest. It is our pharmacy cause all of our medicines are taken from there. It is also our supermarket where our food comes from. Forest represents peace and it is a home physically and spiritually speaking.”

The Yawa people was almost extinguished and in the 1980’s there were less than 300 individuals left. These people like many other indigenous groups were exposed since the first European settlers and the first contacts with the outside civilization was characterized by widespread diseases and conflicts. They were nearly all wiped out on the 20th century due to the rubber tappers and the expansion of the extractive industries. Now, they are a population of 800 spread in eight villages in a territory of 200,000 hectares in the tropical forest.

Tashka’s daily life is very busy. He splits his time between Rio Branco, the capital of the state, and his tribe Mutum 10 hours away by road and boat, with frequent international trips for conferences.

“My father had a vision that I should prepare myself to work in favour of my people. I’ve always faced this as a challenge and a mission. I’ve been travelling the world but I don’t take my feet off my tribe. I admire my father for his wisdom,” says Tashka.

Since he returned to Brazil, Tashka decided to empower his community by rescuing their language and spirituality, while making money from sustainable use of natural resources. The leader focused on building business partnerships like the one with the cosmetics company Aveda in which the indigenous supply urucum – a local fruit with a natural pigment – while the money paid by the company is addressed to capacity-building programs chosen by the tribe. This international partnership has been going on over the last twenty years.

Tashka has no problem with using new technologies to preserve old traditions. It used to be a dilemma for his people, but not any more. They take advantage of hi-tech devices for example to record storytelling and old tales from Yawanawa history. “We cannot run away from technology, it’s part of everyone’s daily life in the 21st century.”

But there is one thing that technology is not able to control: the weather conditions and the effects caused by climate changes. “The most affected ones are the indigenous, when the rains are delayed or whether there’s drought in the forest, it changes the harvest, hunting and fishing.”

For a long time the indigenous people have preserved natural resources for no pay, says Tashka, comparing to the discussion that rich countries should help the ones that have forests in their territory.

He wasn’t surprised to see Brazil refusing to sign the UN pledge to eliminate deforestation by 2030. “I’ve been joining international meetings and there are some countries like Brazil that don’t want to compromise. It makes me sad to think that Brazil, which holds a huge portion of tropical rainforest with a tremendous biodiversity, doesn’t want to commit itself.”

In indigenous lands, no deforestation

It is well known that indigenous lands like the Yawanawa territory in Acre are strong instruments to guarantee the conservation of the forests, says Tasso Azevedo, forestry and climate change consultant.

He is the founder of the Brazilian NGO Imaflora (Institute of Forest and Agriculture Management and Certification) and former director of the National Forest Program at the Ministry of Environment in Brazil.

Azevedo was also at TEDGlobal last week. He was one of the key people behind Brazil’s national plan to combat deforestation in the Amazon, which resulted in a more than 75 percent decline in deforestation. And he designed the Amazon Fund, the biggest global fund for the forest conservation, financing sustainable initiatives in the Amazon region through the UN’s REDD mechanism (Reducing Emissions from Deforestation and Degradation). That is why he won the Bright Award 2013 promoted by the Stanford University to reward individuals who contribute significantly to global environmental action.

“In terms of forestry conservation, indigenous lands in Latin America clearly show lower deforestation rates. In the ranking of protected areas in Brazil, the indigenous territories come first and then Conservation Unities,” he tells RTCC.

The UN estimates deforestation is responsible for nearly one fifth of global greenhouse gas emissions, released when trees are burned or rot down. Protecting trees locks in that carbon.

Brazil has significantly reduced its deforestation rates. A decade ago the devastation reached 27,000 km2 a year; now it is 6,000 km2.

“It is considered the biggest effort in reducing emissions worldwide”, says Azevedo.

But Brazil still has the biggest deforestation problem in the world, he adds, with two football fields worth of Amazon rainforest disappearing every minute.

And there are signs the government has become less interested in protecting its forests in the last few years. Significantly, it refused to sign a UN declaration at the climate summit in New York.

“Brazil didn’t make any effort and didn’t think the climate summit could be relevant but then they noticed they were mistaken. There are many other countries much more proactive than Brazil and we should be leading the international discussions on climate,” says Azevedo.

“Our national plan against climate change should have been revised in 2011 and until now nothing has been done. The previous commitment to zero deforestation by 2015 is not being put into practice. Brazil used to be a global reference but it’s losing its place.”