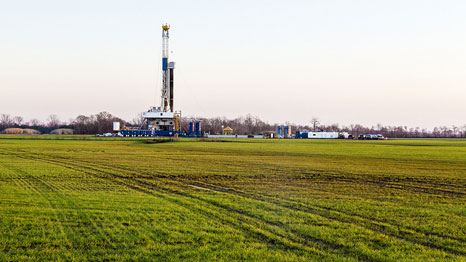 A shale gas boom helped to cut US emissions, but worldwide the picture is more complex
(Source: Flickr/Daniel Foster)

Natural gas burns more cleanly than coal and advocates say it can provide part of the answer to climate change.

In the US, a glut of cheap shale gas has driven a switch away from coal, helping to cut its carbon emissions.

New techniques such as hydraulic fracturing, or fracking, to get gas out of the ground have opened up new areas of exploration.

But researchers across five countries have found a global dash for gas will not, on its own, slow global warming.

“The upshot is that abundant natural gas alone will do little to slow climate change,” said US-based economist Haewon McJeon.

The study, published in Nature, showed abundant gas would undercut nuclear and renewable energy sources as well as coal.

REPORT: World of clean energy is possible by 2050

And while gas emits roughly half the carbon dioxide of coal when burned, “fugitive emissions” in the production stage undermine some of those benefits.

These are leaks of methane, a more potent greenhouse gas than carbon dioxide, from gas wells.

The findings came from five independently produced models in the US, Australia, Austria, Germany and Italy.

“We were surprised how little difference abundant gas made to total greenhouse gas emissions even though it was dramatically changing the global energy system,” said James Edmonds, chief scientist on the US team.

“When we saw all five modeling teams reporting little difference in climate change, we knew we were onto something.”

The results were coordinated by researchers at the US Department of Energy’s Pacific Northwest National Laboratory.

“There’s been some hope that slowing climate change could also be one of its benefits, but that turns out not to be the case.”