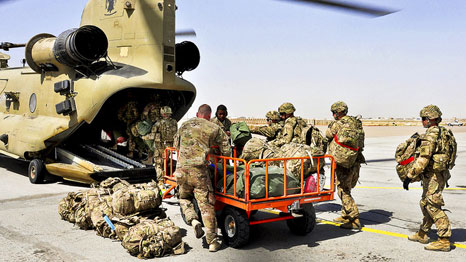 Climate change will change how the US military trains its forces and carries out its operations, according to a Department of Defense report released yesterday.

The effects of a warmer planet will impact the “full range” of the military’s activities, including its planning, training and operations, states the 2014 Climate Change Adaptation Roadmap.

“Politics or ideology must not get in the way of sound planning. Our armed forces must prepare for a future with a wide spectrum of possible threats, weighing risks and probabilities to ensure that we will continue to keep our country secure,” says US secretary of defense Chuck Hagel, in his introduction to the report.

The adaptation plan is rooted in the Pentagon’s 2010 Quadrennial Defense Review, which recognised for the first time that climate change poses a threat to national security. This was reiterated in the 2014 review.

It is a message which secretary of state John Kerry has reinforced, warning that climate change is the world’s “most fearsome” weapon of mass destruction.

But while climate change has long been recognised as a “threat multiplier”, this is the first time that the US military has laid out specific plans to adapt its operations to climate change.

The action recommended by the report fall under three goals: identifying the risks, integrating these across the Department, and collaborating with other stakeholders.

Some of the specific risks identified are the impact of sea level rise on amphibious landings, extreme weather on intelligence and surveillance capability, and melting ice on the stability of the Arctic region.

At home and abroad, the impacts of climate change means the US military may also be called on more regularly to help in disaster-struck areas.

In other countries, the effects of climate change, including mass migration and food scarcity, risk undermining already fragile governments.

“These gaps in governance can create an avenue for extremist ideologies and conditions that foster terrorism,” says the report.

The military has already been working on, and almost completed, a survey assessing the vulnerability of the military’s 7,000 facilities.

The Hampton Roads region of Virginia, where the largest concentration of US military bases in the world is situated, is already experiencing recurrent flooding. The military is planning for a predicted sea level rise of 1.5 feet over the next 20 to 50 years, wrote Hagel.

The department has also promised to review and modify its Arctic Strategy, guidance to combatant commanders, country-specific engagement, and war games.

Training exercises will be adapted to imitate the impacts of climate change, including generating more dust during its activities, which it says could interfere with sensitive equipment.

Climate change could also affect from whom the DoD buys its weapons and how they are stored, says the report, as new physical requirements lead to the need for different equipment.

The department is set to update its advice as climate science improves and the risks become more certain.