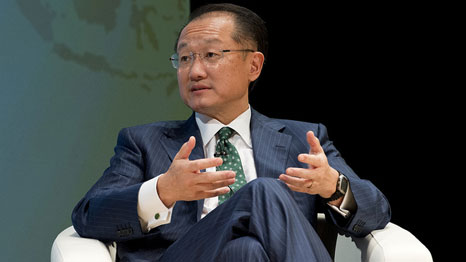 World Bank chief Jim Yong Kim has compared climate change to Ebola, suggesting that inaction on both is “killing people”.

Speaking at the World Bank’s annual meeting with the International Monetary Fund, Kim said that the Bank’s work on climate change was informing its response to the deadly disease, which has killed over 4,000 people mainly in West Africa.

“Ebola and climate change have a few things in common. Most importantly, we are running out of time to find solutions to both,” he said.

“Also, until very recently, the plans to fight them were either non-existent or inadequate. And, inaction is literally killing people – one because of the rapid spread of a deadly virus, the other from the poisoning of the atmosphere and the oceans.

“And finally, perhaps most critically from our point of view, resolving these problems is essential to development, whether from the perspective of human suffering, economic growth, or public health.”

The global response to Ebola has been “late, inadequate and slow,” said Kim, while acknowledging that existing climate policies are insufficient to prevent 2C of warming, the target set by governments.

The World Bank has estimated $32.6 billion in financial damage by the end of 2015 if the virus continues to spread.

Meanwhile, the recent New Climate Economy report, led by economists and politicians including World Bank officials, warned that costs would rise as action on climate change is delayed.

Developed countries are supposed to lead the charge on tackling climate change, but so far the response has been slow. Despite pledges to deliver $100 billion a year in new climate finance from 2020, only $2.3 billion has been raised so far.

Kim said that the World Bank’s initiative to get countries to price carbon would speed up climate action. Presented at the UN summit in September, this saw 74 governments and more than 1,000 companies and investors agree to put a price on pollution.

Saleemul Huq, a senior fellow at the International Institute for Environment and Development, said that, like climate change, Ebola posed an international problem.

“It speaks to the issue of it being an interconnected globe now. The rich can’t isolate themselves from the poor. They can check at the borders and the airports, but they can’t stop it coming in,” he said.

As with Ebola, rich countries are increasingly coming to terms with the fact that vulnerabilities in poor countries will impact their own economies due to globalisation. UK supermarket Asda recently warned that the impacts of climate change, such as heavier rainfall, would affect 95% of their supply chain.

Kim is not the only prominent figure to have spoken out about the need to tackle climate change at the high profile economic meeting in Washington DC.

Mark Carney, governor of the Bank of England, warned his audience that “The vast majority of reserves are unburnable” if the world is to avoid catastrophic climate change.

This creates a risk to investors, who continue to buy shares in oil reserves, despite the chance that they might never be extracted and sold.

Campaigners have long warned that this could create a “carbon bubble”, as the world ramps up its efforts to move away from fossil fuels towards more sustainable forms of energy.

Energy companies have largely rejected the threat, which risks undermining the value of their assets by billions. BP stated earlier this year that the carbon bubble approach “overstates the financial impact” that the transition to a low carbon economy would have on the fossil fuel industry.

Carney said he supported the idea of “integrated reporting”, where companies include all elements of their business strategy in their annual report, including environmental risks.