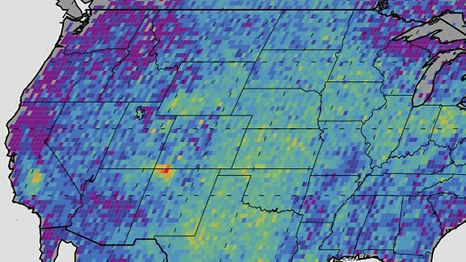 The red blob shows raised levels of methane in the air, as measured from space between 2003-2009
(Source: NASA)

Unconventional methods of extracting fossil fuels could be releasing more methane into the atmosphere than thought, scientists have warned.

The US administration is taking steps to make the coal, oil and gas sectors measure and reduce emissions of methane, a potent greenhouse gas.

NASA has published satellite data that shows emissions at a methane “hot spot” are more than triple what was measured on the ground.

Scientists first noticed the blip near the intersection of Arizona, Colorado, New Mexico and Utah years ago.

“We didn’t focus on it because we weren’t sure if it was a true signal or an instrument error,” said researcher Christian Frankenberg.

But the high readings persisted. Between 2003 and 2009, the region released an average 0.59 million tonnes of methane a year, almost 3.5 times the ground-based estimate.

This was before the controversial practice of hydraulic fracturing or “fracking”, which is known to pose a risk of methane leakage, became common in the area.

Scientists from the University of Michigan traced the rogue emissions in this case to coalbed methane production in the San Juan Basin, New Mexico.

That is a technique to extract gas from the cracks in coal seams. In 2012, methane from this source supplied 8% of US natural gas demand.

“There’s been so much attention on high-volume hydraulic fracturing, but we need to consider the industry as a whole.”

Methane has a global warming effect 21 times stronger than carbon dioxide. According to the Environmental Protection Agency, it accounted for 9% of US greenhouse gas emissions in 2012.

The latest study, published in Geophysical Research Letters, suggests traditional methods of accounting for methane may underestimate the scale of the problem.

Kort and his team took the satellite measurements of methane concentrations in the air and used a model to calculate the emissions rate needed to produce those results.

Frankenberg said the study showed the value of measurements from space.

“Satellite data cannot be as accurate as ground-based estimates, but from space, there are no hiding places,” he said.

The findings came as a UK coalbed methane project got the go-ahead.

Dart Energy’s application to explore a coal seam in North Wales was originally turned down by the local authority, but this decision was overturned on appeal.