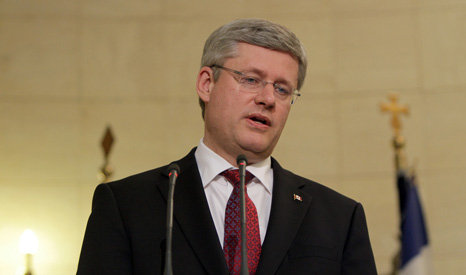 Canada’s commitment to tackling climate change has been questioned after the Office of the Auditor General said it could not see a clear strategy to curb carbon emissions.

A commitment to cut greenhouse gas emissions 17% on 2005 levels by 2020 would be missed, it said, with current measures set to achieve just 7% cuts.

In a withering assessment of Environment Canada, Natural Resources Canada and Transport Canada, the three departments tasked with addressing carbon pollution, it said there was an “absence of effective federal planning”.

Plans to curb emissions from the oil and gas industry had been “repeatedly delayed”, despite projections the sector will contribute 200 million tonnes of emissions in 2020, 27 Mt more than 2012.

“Although detailed regulatory proposals have been available internally for over a year, the federal government has consulted on them only privately, mainly using a small working group of one province and selected industry representatives,” it said.

Canada is the world’s fifth largest oil producer, the bulk of which is derived from tar sands in the state of Alberta.

According to the US Energy Information Administration the industry is dominated by Suncor, Syncrude, Canadian Natural Resources Limited, Imperial Oil and Cenovus.

Environment Canada had not supplied adequate information about future greenhouse gas emission regulations, the report added. Those that had been released lacked timelines or information on how heavy emitters would be affected.

It found only two carbon cutting measures for which the federal government could assess results: regulations on renewable energy and passenger vehicles. Even for these, it said government lacked tools to calculate overall compliance.

The office of the Auditor General reports to the Canadian House of Commons, not government. It is tasked with providing “objective, fact-based information and expert advice” to MPs.

Published on October 7, the report also said there had been “no detailed federal objectives” for further emission cuts after 2020.

This line will concern UN officials working on a global climate deal, since Canada along with other developed economies is expected to release its projected emission curbs by March 2015.

“In our view the lack of a clear plan and an effective planning process is a particularly significant gap,” reads the report, which suggested that “evidence is now stronger” that its 2020 CO2 goal will be missed.

The lack of any federal objectives beyond 2020 will surprise other developed countries, given the level of long term planning now taking place in the EU and US.

Stephen Harper’s government is on record supporting efforts to secure an international climate agreement in 2015, although the prime minister declined to attend Ban Ki-moon’s summit of world leaders in New York last month.

In 2012, the country pulled out of the Kyoto Protocol, the world’s only legally binding climate treaty. It has also supported Australia’s recent moves to scrap its carbon tax, which Harper described as “job killing” in June.

The one area the Auditor did find the government on its game was in accounting for its climate finance aid to developing countries, which amounted to CA$1.2 billion between 2010-2012.

But it said that around $615m of this was given on the condition it would be repayed to Canada, which could “increase the debt levels of the final recipients”.

In an official response to the Auditor General, the government declined to say it what its climate plans for post 2020 were, but said it would maintain its “sector by sector” approach to curbing emissions.

“Canada’s 2020 GHG emissions are projected to be about 130 Mt lower relative to a scenario with no action,” it said.

Protecting the environment while boosting economic growth would continue to be government policy, it added, stressing the economic importance of the Alberta tar sands.

“To support the responsible development of the oil sands, the Government, in partnership with Alberta, launched the world-class Joint Implementation Plan for Oil Sands Monitoring.

“Moving forward, we will continue to work with Alberta, in partnership with aboriginal communities, to enhance this world-class scientific monitoring program.”