Text needs to be ready for translation by May 2015 say officials, who urge countries to “build bridges” 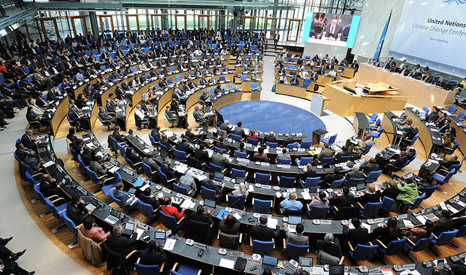 Countries have less than six months left to agree on the rough outline of a global climate change agreement, according to the two UN officials coordinating the process.

Artur Runge Metzger and  Kishan Kumarsingh say they are “greatly encouraged” by progress on developing a draft text, but warn time for negotiations is running out.

“October is the time to start reaching out genuinely to each other and build bridges,” they write in what the UN terms a ‘scenario note’.

“We encourage you to deepen your discussion with a view to moving towards common ground wherever possible or, where not, arriving at limited and concrete options.”

They say the draft text of a proposed climate deal to limit warming to below 2C needs to be ready by May next year so it can be translated into all of the UN’s official languages.

This will then be assessed ahead of a Paris summit in December 2015, where it is scheduled to be signed off by heads of state.

Envoys from just under 200 countries will gather in Bonn later this month for a week of talks, just over a month before a high-level two-week UN climate summit in Lima, Peru.

Runge Metzger and Kumarsingh say the priority of the Bonn meeting will be to develop an understanding of what countries should offer as national commitments to a UN deal.

Leading economies have promised to deliver their initial pledges by March 2015, but aside from greenhouse gas reductions it is unclear what else they are expected to offer.

Other components could be financial aid to poorer countries, help with adaptation planning and the transfer of valuable low carbon economies to the developing world.

The officials say they hope to “ideally reach conclusions on them in this session.”

Other issues they say are still unclear include the length of emission reduction commitments, levels of finance on offer, and how any agreement will be implemented.

The legal aspects of the proposed 2015 treaty “have not been explored to any great extent” they say.

New York summit: what it means for climate treaty prospects