Save mangroves for people, planet and the economy, says UN

Destroying mangrove forests will cost $2 billion a year up to 2050 and contribute to climate change, says UNEP 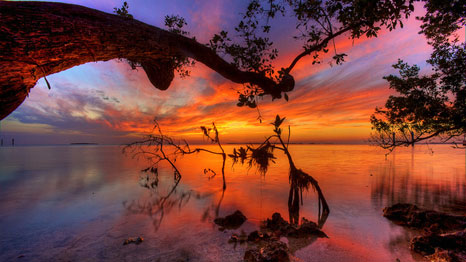 Mangroves are being destroyed up to five times faster than forests, making them one of the most threatened ecosystems in the world.

By destroying these aquatic forests, humanity is depriving itself of a wide range of economic and social benefits, according to a new UN report launched yesterday in Athens.

Mangrove losses make up nearly one-fifth of the emissions from deforestation, resulting in damage worth US$ 6-42 billion every year, say researchers in The Importance of Mangroves: A Call to Action.

They add that the changing climate could kill off a further 10-15% by 2100. Currently, there are 152,000 square kilometres of mangrove cover around the world.

Achim Steiner, head of the UN environment programme, said that mangroves provide up to $57,000 per hectare in economic benefits every year.

“Add to that their superior ability to store carbon that would otherwise be released into the atmosphere and it becomes clear that their continued destruction makes neither ecological nor economic sense,” he said.

Around a quarter of the world’s original mangrove cover has been damaged by pollution or destroyed to make way for farms, fish farms and coastal development.

This hurts the 100 million people in 123 countries who depend on mangrove forests for fishing and forest products, as well as protection against extreme weather events such as tropical storms and tsunamis. 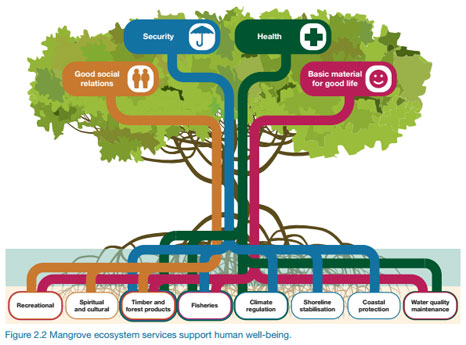 Jurgenne Primavera, the chief mangrove scientific advisor to the Zoological Society of London, highlights in the report the role played by mangroves in preventing even worse impacts when Typhoon Haiyan hit the Philippines last year, killing over 6,000 people.

“This disaster served as a wake-up-call to the world, highlighting the vulnerability of coastal countries to the impacts of climate change,” she says.

“It also highlighted the important role that mangroves can play as nature’s ‘bioshields’, serving as a natural buffer which can reduce the wave energy and height of storm surges and thus protect vulnerable coastal communities.”

More than 90% of the world’s mangroves are located in developing countries.

The connection between livelihoods and mangrove forests is particularly strong in south east Asia, where it is estimated that 30% of caught fish depend on this ecosystem. That rises to almost 100% for certain species, including some prawns.

They act as a natural storage system for carbon that would otherwise enter the atmosphere, sequestering about 1,000 tonnes of carbon per hectare.

The report suggests that protecting these carbon reservoirs should therefore be seen as a sensible and cost-effective measure to help mitigate climate change.

It recommends specifically including mangroves in the post-2015 sustainable development goals. Private sector investments and the UN’s forest preservation scheme, REDD+ can also help, it says. 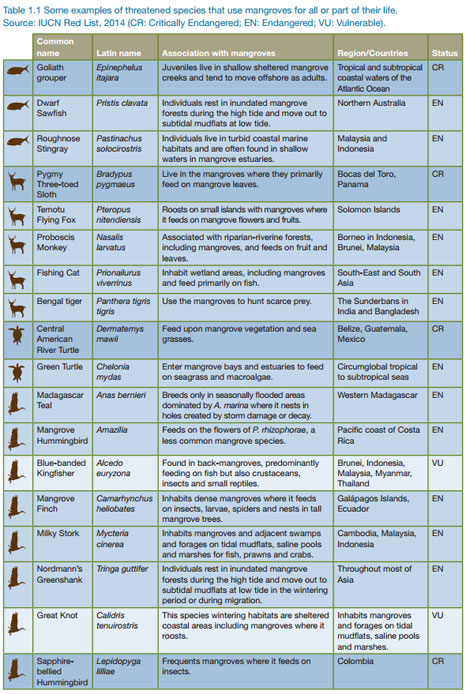