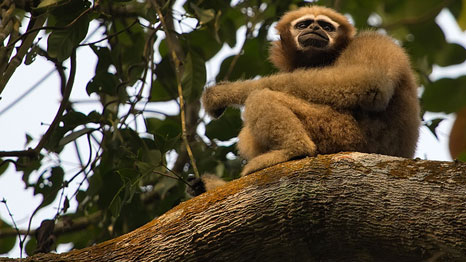 Over half of the world’s wildlife has disappeared in 40 years, due to exploitation, habitat degradation and climate change.

African lions, hoolock gibbons and snakes are examples of species that have declined dramatically since 1970, according to a new report from WWF, compiled using data from the Zoological Society of London.

“Imagine if half the animals in London zoo died in the next week, that’d be front page news, right?” said Professor Ken Norris, ZSL’s director of science.

“People in London and elsewhere would be seriously upset by that, yet that’s been going on in my lifetime in the great outdoors and we’re not upset and annoyed about that, so we’ve failed partly to get out the message to the public.”

Climate change has been a major factor in 7.1% of the species whose numbers have declined – a threefold increase from 1970. It may also have indirectly affected other species, by contributing to habitat degradation.

And it’s a figure which the experts who crunched the data say will rise as the planet warms further.

“While the current number is quite low, as we go forward we’re going to see a massive increase of the impact of climate change,” said Jonathan Baille, conservation programmes director at ZSL.

“It’s just the beginning phase, but we know there’s going to be a large number of species crashing due to climate change very soon.”

Of the vertebrate species whose decline was measured by the Living Planet Index, freshwater species fared the worst, their numbers having fallen by 76% since 1970.

Land and ocean creatures both declined 39% over the same period.

The drop is greater in the tropics than in temperate regions, although both are affected by losses in biodiversity. Latin America has seen the greatest reductions, with a fall of 86%.

Scientists gathered the data by monitoring 10,380 populations of over 3,038 vertebrate species over many years, also using the input of the general public in their research.

“Climate change is a huge threat from WWF’s perspective to the work we’ve being doing for more than 50 years now to protect endangered species and their habitats and to enable humanity to live on this planet in a sustainable manner,” said David Nussbaum, head of WWF-UK.

Low income countries have seen a greater decline in animal populations than their rich counterparts, but experts warned against seeing this as purely the result of better conservation practices.

The report says that the data, which has only been collected since the 1970s, masks large scale biodiversity loss in Europe, North America and Australia before this period, leaving more resilient species better able to cope with the impact of mankind.

It also disguises how rich countries are able to outsource their resource needs abroad, the experts added. “When we talk about Europe or America or any country, we’re going to have to be much more aware of that impact,” said Baille.

The decline requires a more rigorous response from governments, but in particular from the general public. The report suggests preserving natural resources, producing more renewable energy and consuming more wisely as ways to halt the rapid decline in wildlife.

Forthcoming conferences of the UN’s biodiversity and climate, as well as the forming of the new Sustainable Development Goals, provide an opportunity to address the problem at an international scale.