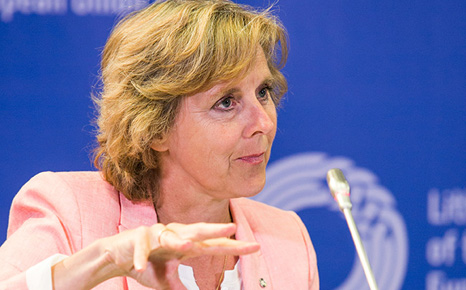 India may not be required to commit to slash its greenhouse gas emissions under a new climate change deal, according to the EU’s climate commissioner Connie Hedegaard.

Major economies have six months to reveal how they will contribute to a proposed UN climate deal, set to be signed in Paris next December.

Despite being the world’s third largest carbon polluter, the Delhi government says it has no intention of making any emission cuts, citing the need to develop and provide 400 million people with electricity.

Speaking to Bloomberg TV two days after a major UN climate summit in New York, Hedegaard said India “had to be a part” of any agreement, but said there were other ways it could show willing.

“They have big needs; what we could see from India is what are they doing on more renewables, efficiency, how are they pursuing a low carbon development strategy, that is what we should ask from the Indians – not total cuts. There the US and China will have to go before India.”

Her comments appear to mark a change in tone from the EU, which has previously called on Delhi to accept it needs to slash its soaring levels of carbon pollution.

Earlier this week India’s environment minister Prakash Javadekar told the New York Times there was no chance it would release plans to curb emissions next year.

Hedegaard, who recently travelled to India for meetings with Javadekar, warned against expecting India to follow China, which said this week it could announce a carbon peaking date early next year.

“I just think we should not treat China and India totally the same, it’s very different, the emissions per capita is much different,” she said.

Stressing the importance of strong signals from the US early in 2015, Europe’s outgoing climate commissioner also reiterated her belief that the EU’s 28 member states will agree on a long term energy and climate package next month.

Brussels had a “responsibility” to be a front runner, she said.

In a sign of how tough talks on the 2030 package are likely to be, EU energy chief Gunther Oettinger said plans for a 40% emissions reduction target should depend on a similar UN agreement.

“If there is no binding commitment from countries as India, Russia, Brazil, the US, China, Japan and South Korea, whose governments are responsible for some 70% of global emissions, I think it is not really smart to have a -40% target,” the Guardian reported him saying.

The EU accounts for around 10% of global emissions, but has some of the most ambitious climate laws on the planet, with a current target of 20% CO2 cuts by 2020.

In a sign of how closely other countries are watching the EU, Gambia’s environment minister said failure to deliver a package would be a “disaster” for the UN process.

“Next month will be crucial. It is important that they don’t postpone that decision,” he told RTCC.