Europe’s 2030 climate and energy package is critical to a strong deal in Paris, says negotiator for least developed countries 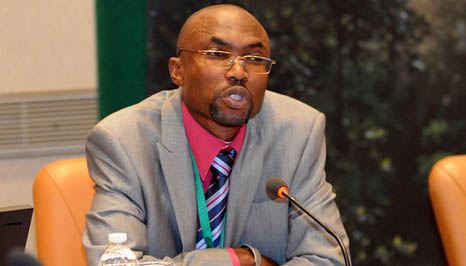 Upcoming European negotiations on its 2030 energy and climate targets will likely determine whether a proposed 2015 UN emissions reduction deal is a success, Gambia’s environment minister has said.

The EU’s 28 member states are still in talks over the level of emissions cuts to aim for, together with renewable energy and energy efficiency goals, with a decision slated for October.

Speaking a day after a world leaders’ climate summit in New York, Pa Ousman Jarju stressed a strong EU deal was critical, as it would set a benchmark for others to follow.

“We think the EU as a bloc has been forward-looking, but of late we have seen Poland, Hungary being resistant with regards to the agreement,” he told RTCC.

“Next month will be crucial. It is important that they don’t postpone that decision. Waiting for March would be a disaster.”

Outgoing EU president Jose Manuel Barroso told fellow leaders at the UN’s climate meeting he wanted to see a 40% emissions reduction target agreed for 2030, based on 1990 levels. The current goal is 20% by 2020, backed up by renewables and efficiency policies.

Other countries are waiting for Europe to reveal its hand, said Jarju, who confirmed Gambia would submit its contribution to the UN’s 2015 deal early next year.

But he warned a lack of clarity would lead to a “weak outcome in Lima”, scene of the UN’s next climate summit this December.

“We want to have details on very ambitions emission reduction targets, we think as leaders they need to lead by example. They have a responsibility.”

He also plays an influential role within the African group at UN talks, traditionally a quieter coalition but one that is slowly gaining voice.

The continent’s leaders are coming under increasing pressure from populations to accelerate development, with over 800 million of their citizens still lacking access to electricity.

Progress on this front has been slow, hampered by a lack of finance and private sector reluctance to make large and potentially risky investments.

“Without energy it will be difficult to have the private sector to come in,” admitted Jarju, who said high costs of power in Gambia are a constant source of complaint from consumers.

What especially disappointed him at the UN climate summit was the lack of clear backing for the Green Climate Fund, which was set up to help poorer countries build clean energy plants.

“I was expecting a minimum up to US$10 billion,” he said. Instead just over $1 billion was forthcoming, meaning the GCF has $2.3bn to its name.

Gambia alone needs $1 billion over the next decade to deliver clean energy to its citizens.

Plans for two dams – which will be built with support from China and development banks – will generate 18% of the country’s needs.

But more backing is needed, especially if the rest of the world wants to ensure Africa leaves its vast coal reserves in the ground.

“It is the desire of our heads of state to provide energy security to the people,” said Jarju.

Now the focus will turn to what is now a critical November meeting, the final chance for rich countries to deliver cash before Lima.

“Both developed and developing countries need to realise that this is what is going to catalyse the trust building.

“If we miss this opportunity the trust gap is going to widen, and I do not think that is good for the process.”

Building trust was perhaps one of the few tangibles from this week’s climate summit, which saw over 120 leaders back UN plans for a global climate deal.

Business also came to the party, with the UN estimating that pledges from investment groups and companies amounted to $200 billion.

But the day after the night before, there was also a sense that the near-euphoria that marked parts of the day-long meeting may have been overblown.

“It’s an opportunity… the awareness has been raised, governments have indicated in generic terms what they intend to do,” Jarju said, adding quickly: “The devil will be in the detail.”

He spent much of that day in bilateral meetings – speaking to officials from the EU and UK among others. He plans to meet US and Chinese envoys later in the week, on the sidelines of the ongoing UN general assembly meeting.

One country he is unlikely to carve out time in his diary to speak to is Australia.

Its prime minister Tony Abbott ignored the climate summit, sending instead foreign minister Julie Bishop, who said the country would cut emissions 5% by 2020.

For countries on the frontline of global warming, battling drought, rising sea levels and other extreme events, Canberra’s attitude is hard to understand.

“I’m disappointed but not surprised with Australia,” said Jarju. “What the foreign minister said was as good as not coming. It’s nothing… as good as not attending.”