Marina Silva, the Amazon champion who could lead Brazil

Known globally as a tireless defender of the rainforest, Marina Silva has a strong chance of becoming Brazil’s next president 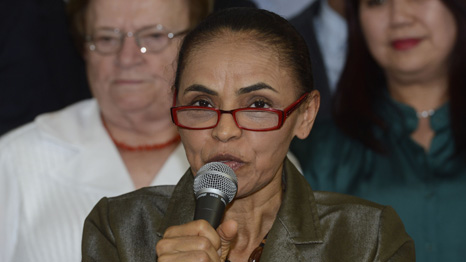 Born to a poor family of rubber tappers and raised in the middle of the Amazon jungle, Marina Silva breaks the mould for Brazilian politicians.

The 56-year-old activist and former environment minister has overcome battles with tropical diseases and health problems from mercury poisoning to enter the presidential race.

And when 200 million people go to the polls on 5 October, Silva could become the first black woman to lead Brazil. The latest polls put her neck and neck with incumbent Dilma Rousseff.

So what would a Silva victory mean for climate protection?

“There will hardly be other candidates comparable to her. But from an electoral point of view, most voters identify themselves with her life story rather than with her discussion of sustainability.”

Silva is known for her struggles to protect the rainforest from illegal logging. She was named a Champion of the Earth by the UN’s environment body in 2007 and was described by the Guardian as one of 50 people who can save the planet.

She won 20 million votes from Brazilians in the last 2010 presidential elections. Now the green and socialist Marina Silva is back, thanks to a mix of luck and enthusiasm.

She came to prominence after the Brazilian Socialist Party (PSB) candidate Eduardo Campos died in a tragic plane crash on 13 August.

In a surge of popularity named the “Marina phenomenon”, Silva has come to pose a serious threat to Rousseff’s leadership, with some polls putting the challenger ahead. 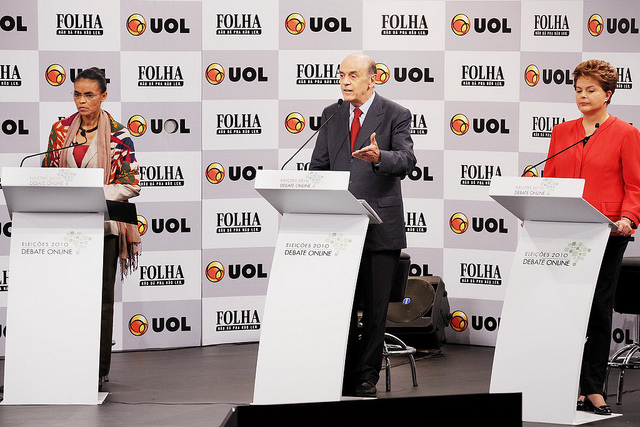 If elected, Silva has made clear protecting the Amazon will continue to be high priority.

At a press conference on 17 September, she said: “I won’t outsource my mandate.”

Sustainability is a policy that “integrates economy and ecology”, Silva added. “We will implement a policy of sustainable forestry for public forests. We shall work hard in the water resources management as well as combating deforestation and supporting sustainable production activities.”

She has a track record of taking on powerful vested interests as environment minister under president Lula da Silva, who ruled from 2002 to 2010.

Silva imprisoned more than 700 people for environmental crimes and slashed the rate of deforestation in half. This meant clashing with the big agricultural businesses responsible for 20% of Brazil’s GDP. 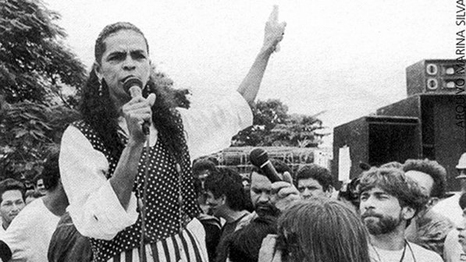 For congressman Alfredo Sirkis, chair of Brazil’s climate change commission, Silva is the “greenest” of the presidential candidates.

He tells RTCC: “There is no doubt she will be a president concerned with environmental, climate and sustainable development issues. She is certainly the only candidate who knows more about these problems and has a more focused will in dealing with these subjects.”

In his opinion, Silva will try to implement sustainable development policies throughout government.

“It won’t be easier at first because we have quite a complicate economic situation at this time,” says Sirkis, but she will represent “an important step forward”.

Sirkis expects Silva to intensify discussions with the agricultural sector and raise taxes on activities that harm the environment.

What are her chances?

Supporters of Silva say voters will identify with her poor rural upbringing and resistance to “predatory development”.

She is associated with the union leader and forest champion Chico Mendes, who was murdered in 1988 after taking on landowners.

Rogerio Rocco, a lawyer and environmental consultant, says: “She resisted the mercury contamination caused by gold mining in the forest. And her name represents the opposition to large estates of soybean and genetically modified crops as well as cattle raising.”

He recalls that as environment minister, Silva used to clash with Rousseff, who was responsible for mining and energy at the time.

However, critics accuse Silva of changing her positions and question her competence.

“There’s no assurance she will be able to rule properly,” says João Feres from the Institute of Social and Political Studies. “She has been attacked for her inconsistencies. Before she was in favour of gay marriage, then she changed. And she is now being supported by the right-wing military sector and neoliberal economists.”

She has stopped saying agribusiness is an environmental problem, he adds, which could alienate her traditional supporters. And she has chosen as vice president Beto Albuquerque, a man with financial links to the agribusiness, alcoholic drinks and arms sectors.

On the other hand, her historic opposition to infrastructure projects may put off voters who are more concerned about economic development than green issues.

“The green issue is not an important agenda for Brazil, this can be rather frustrating”, says Feres.

In her defence, da Veiga says Silva’s position has not changed since 2010.

“If Silva is elected, the number of companies and businesses willing to become sustainable and acquire a green certificate will multiply from one day to another. There will be a stimulus for people to join the debate.”