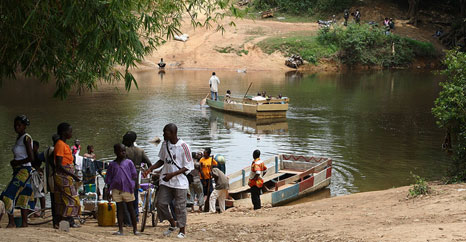 Liberia is ready to bear some economic cost in order to stop the desecration of its forests, the country’s foreign minister Augustine Kpehe Ngafuan told a UN summit in New York today.

It made for an emotional session: the country’s President, Ellen Johnson Sirleaf, was unable to attend the summit due to the Ebola outbreak in Liberia. Ngafuan told reporters the disease has isolated Liberia, compounding the effects of the civil war, which rendered the country a “pariah”.

He said: “We as a small country can make a huge contribution to the global community.”

Illegal logging is rife in Liberia since the end of its civil war in 2004. Norway has pledged US $150 million to help the country end all deforestation by 2020. The money will initially go to building capacity in government and society.

Yet the country faces a “huge challenge” in creating growth and jobs, and the forestry sector was part of Liberia’s response to that challenge, he said. The money Norway contributes will help to relieve the pressure on the economy and put it on a path to more sustainable development, he added.

Ngafuan told RTCC that once capacity has been developed, carbon payments through the UN REDD+ (Reducing Emissions from Deforestation and Degradation) mechanism would help boost the national economy but that they would also go to compensate forest communities for any lost income.

Managing director of Liberia’s Forestry Development Authority, Harrison Karnwea said the preservation of the forests will also help the country build its resilience to flooding and soil erosion.